You’re shivering, but your palms sweat. You squirm on the unsympathetic chair, and squint into a spot lamp as a voice barks questions at you from the darkness beyond. That’s right, punk, you stole a photo from iStockphoto, and now they’re gonna make you sing like a canary. It’s a fair cop, and no mistake.

For some years now Getty (owners of iStockphoto) have been setting their attack lawyers on business owners and bloggers who have unwittingly (ok, let’s be honest; knowingly) stolen photos from the web to use in their own websites. Normally, a web designer or amateur site builder will trawl Google images for something appropriate to their requirements, mis-appropriate it and use it thinking “well that was easy, so maybe it’s not illegal.”

This is fine and dandy (barring the ethical question of stealing from photographers), until the perp happens to steal an image which should have been licensed through iStockphoto, because that’s when the klaxon alarm goes off at Getty HQ, and the lawyers start booking another expensive restaurant meal based on future incomes from hapless/clueless/amateur website builders. 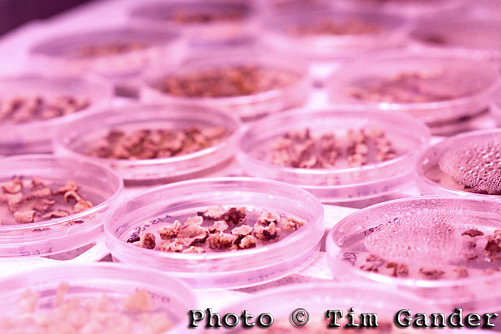 The "culture" of photo theft has to be tackled.

There was the fairly spectacular case of the removals firm which ended up spending £24,000 on a photo that might have cost around £160 had they licensed it legally, and there’s been a long-running and rather overheated discussion on the Federation of Small Businesses forum which has largely concentrated on how unfair it is that anyone should defend copyright so vigorously against people who were, after all, only stealing what they wanted and couldn’t be bothered to pay for (that’s a brutal summary, but not unfair).

Getty Bad Cop has earned something of a reputation for being belligerent and heavy-handed, and even I would disagree with some of their methods, even though I support the aims of protecting copyright property as I support anyone’s right to protect their own property.

However, perhaps sensing that this approach isn’t getting them much good publicity or winning any new friends, Getty have rolled out a new weapon. Stockphotorights is the cuddly face of the mass image aggregator hell-bent on cornering and dominating the stock image industry. It’s Getty Good Cop.

I have to admit, I rather approve of the aim of stockphotorights which is deigned to educate even the most casual user of images about the dos and don’ts of using photos. I’ve been trying to help people understand copyright and licensing for years, but let’s face it, I’m not Getty and don’t have anything like their resources to reach the masses. Plus where some people will just think it’s Tim spouting off about copyright AGAIN, they might take notice of the message from Getty.

Naturally, the site is aimed purely at users of stock images and only really mentions Getty-related agencies, but the same applies to any image found on the internet, so well worth a read.

So let me get you a glass of water, a more comfortable chair; perhaps turn off the interrogation lamp and offer a call to a solicitor. I’ll ask the Guv to calm down, take it easy. Better yet, take a few minutes to read the wealth of info at stockphotorights and we can all go home early.