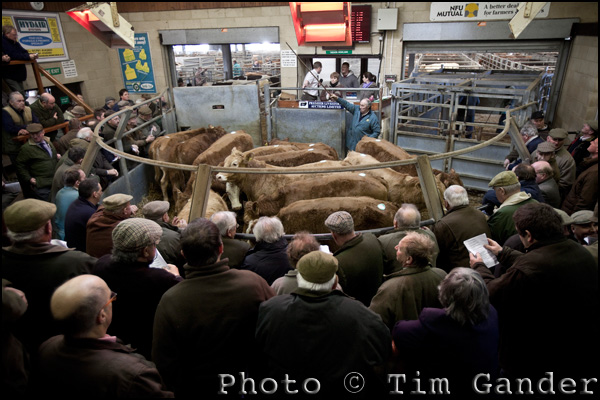 At least in a livestock auction bidding tends to go up, not down.

The parallels between the photographic industry and farming aren’t as obscure as you might think.

Imagine Getty are the Tesco/Asda/Sainsburys of the picture world, where the suppliers of the produce they sell have little control over the price they’re paid for their goods, regardless of the cost of production.

There are only so many outlets for farmer photographers, owned by some very powerful businesses that will set the selling price to wherever they think they need to in order to gain market share and make a profit.

I mention profit, but I’m not sure if Getty (who also own iStockphoto) are in profit for their stock photo portfolio of businesses, and reliable figures seem elusive, but they’re certainly good at spending whatever money they have on expansion plans.

One advantage farmers have over photographers is that they are paid for their produce by the wholesalers or retailers who then sell it on for a profit, while stock photographers give their work to the libraries for free in return for a commission, but only if a photo sells. And a photo might never sell, or might only sell for a few pence, of which the photographer might get a few pennies.

By way of leaving the farming analogy to one side, I’d like to say I have the utmost respect for farmers and I’m glad they do a job many of us couldn’t cope with.

The news that Getty have now acquired the Australian stock image library Photolibrary, close after the announcement that they’ve also acquired image-tracking firm PicScout, means Getty are still aggressively expanding and consolidating their business, but you won’t see photographers jumping for joy and I think in time neither will picture buyers be especially delighted.

Getty will want to see a return on their investments, so it may be we can expect them to switch the PicScout phaser from stun to kill as they target image infringers and recoup their money through either higher or more numerous payment demands.

As for their buying up yet another image library, what possible advantage is there to a business or a designer that they can now choose from an even larger library of the same old same old? Surely once you’ve seen one sterile business picture, you’ve seen them all. Getty can’t claim to have extended buyer’s choice any more than Heinz can claim to have extended our choice of baked beans by making more tins of the same beans.

It also appears that Getty are looking to turn the screws once again on their contributing photographers by introducing terms that mean Getty will be able to move images from Rights Managed to Royalty Free licensing, with no mechanism for contributors to opt-out of such a scheme. This leaves contributors with less control over how their images are used and the prices set. For buyers, it will mean even less exclusivity, making stock imagery even less attractive than it already is.

That final point probably explains the rise in enquiries I’m getting from businesses that are wanting to break free from the herd and be noticed (back to farming!), but I’d rather Getty used less aggressive tactics anyway because they don’t reflect well on the industry as a whole.

It’ll be interesting to see where all this activity leads. If Getty want to take a lion’s share of the market with a view to pushing up stock image prices, they may find this is a very long game indeed. I’m sure they have a plan, but in this world of over-supply and finite demand, it’ll have to be a very cunning plan or a game with infinite budget.

UPDATE: ASMP makes thinly-veiled suggestion to American photographers that if they contribute to Getty, they should consider other means of distributing their images (in other words, quitting Getty). More at PDN.