How Pro is your Profile?

According to 90% of statistics, 75% of all life forms on Earth are either on Twitter, Facebook, Linked In or all three, while the remaining 25% haven’t developed opposable thumbs and don’t have broadband yet.

Ok I just made all that up, but statistically speaking I’m probably right, and anyway it’s fair to say that if you’re reading this article, you’re also (and probably simultaneously) chatting on Facebook, tweeting and maybe updating your Linked In account, or somesuch useful activity.

What you might also be doing is uploading another comical profile photo to one or all of these accounts, but if you’re using any of them as a way of presenting your “professional” self, should you really be uploading that photo of your bottom with the comedy mustache and glasses? Do your clients really want to see you, lobster-like from the beach, wearing a jaunty party hat, a bottle of wikkid, or whatever in your hand?

Even if your photo is more sober, do you look like one of Interpol’s most wanted; or as if you work in a stationery cupboard, surrounded by files, papers, shelves and broken fax machines? 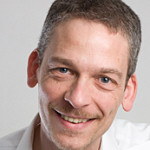 The model wasn’t much cop, but at least he’s recognisable.

Your profile photo might be just a couple of hundred pixels, but that’s even more reason to make the most of each and every one of those babies. It’ll be the first thing anyone looks at when they see your profile, or any comment you make on a social or business site. So make it work for you; make sure it’s clear and makes a decent impression.

That isn’t to say it can’t be humorous, but remember that your sense of humour isn’t everyone’s cup of tea. My photo is straight and simple, but at least I’m recognisable from it.

So often, that valuable little space on the web page is wasted with a photo that is too detailed to make sense, and the subject of the photo is so small in the frame that their own family couldn’t recognise them. But whether you’re beautiful or have a face like mine, what people want to see is you. They want to know what the person behind the Facebook account or Twitter conversation looks like because normal people engage and do business with other normal people.

Hiding behind an obscure photo, pattern or, perhaps worst of all, a blank space can make your comments on blogs and in discussions look like spam. People want to know you really exist, that you’re not hiding behind a phishing scam. It’s one more opportunity to make an impression and (oh how I hate marketing speak) “build your brand” *gag*.

So do yourself a favour. Get a decent photo, get a friend to take it. If you’ve hired a photographer to take pictures for your business anyway, ask them to shoot you a profile photo with decent lighting. Then stick with that picture for as long as possible, because it will be what people come to recognise you by on all the forums and sites you engage with. Keep changing it, and people will lose track of who you are.

Now go, get it done and don’t let me catch you looking like a drunken party closet terrorist again.