Can we please get on with our jobs?

Shame on me, the deadline is looming and I’ve still not submitted to the call for evidence into the feasibility of the Digital Copyright Exchange (DCE).

To address this I started work on my submission yesterday with the thought of airing my fascinating views on the subject both to the DCE call for evidence by Richard Hooper and here in my blog, but then an email came in from the Design Artists Copyright Society (DACS – see more about them here).

Are you starting to see where I’m going with this? There appears to be an almost constant flow of reviews, calls for evidence, surveys and reviews of the results of reviews, calls for evidence and surveys around the issue of copyright. And this has been going on for years! It’s like an American freight train that’s become so long, the engine driver can see the back end of his own guards van as he goes round in a never-ending loop.

I’m beginning to suspect that the purpose of all these reviews is to keep some civil servants in endless employment, and to wear photographers and other creatives down until they just give up submitting evidence and the freeconomists win the argument by forfeit.

The basis of all this gravytrainery is that it’s been decided (by someone who might have a vested interest *coff* GOOGLE!) that copyright is unfit for purpose in the digital age, and so the reviews began.

What seems to be ignored is that copyright is perfectly fit for the digital age, but that systems for preventing its abuse haven’t been kept in line with the ease of the abuse. Neither has education kept pace with the sudden access that everyone now has to easily findable and replicable online content. 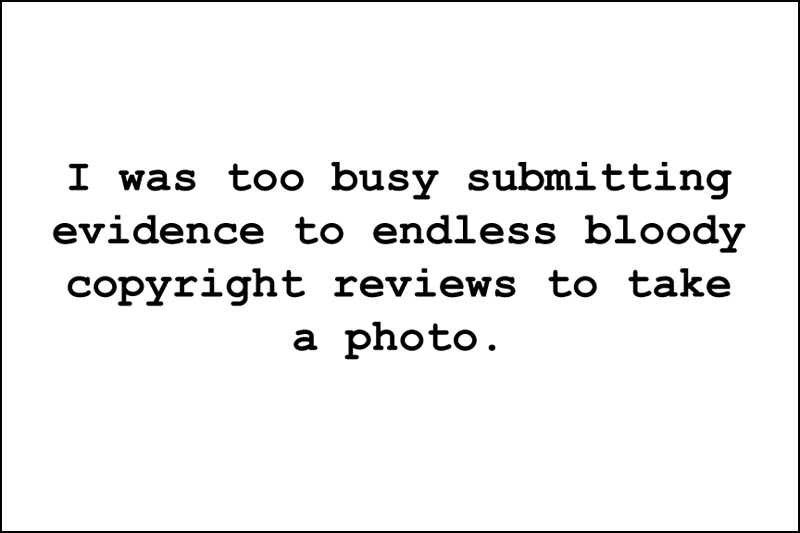 Defending my job is becoming a full-time job

The cause of creators hasn’t been helped by the big conglomerates that control a lot of copyright works, such as the music labels, film studios and mass photo libraries, all of whom have made great strides in aggravating the people who wish to access and enjoy the products they licence. So the argument about copyright is often seen as the ‘little’ people against the goliath organisations, where in fact it’s the ‘little’ creators who create the content which is then sold on by the Goliaths. When copyright is infringed, very often it’s the creator who loses out while the big organisations continue to make healthy profits from the work of others. They also have the financial clout to defend infringements more forcefully than individual creators.

Perhaps the most worrying thing of all for creators is that every time there is a review, the evidence which is seen most prominently will be that of the many people who don’t understand why they have to pay for what they can so easily copy, and the aggregators whose protection of the works doesn’t always translate into protection for those who created the works in the first place.

All of which is to say, I’ll have to get this submission done, and complete the DACS survey, AND submit to the IPO review. After which, could I please be allowed to get on with my job instead of endlessly having to defend my livelihood? Probably need to review that.

Don’t you hate it when photographers go on about how great they are? I mean it’s a really egotistical thing to do and frankly it makes my skin crawl when they bang on about their amazing photos. Which is why I’ll let my first client of the year say it for me instead 😉

Suzanne Kimberlin is a therapist based in Wiltshire, and late last year she called me up because her web designer had recommended me to shoot her portrait for her new website.

Our first conversation didn’t prove too promising as Suzanne was clearly nervous about having her photo taken and not convinced anyone could take a photo she would like. Despite this we set a date in the first week of 2012 and I turned up on the day, determined to do her justice.

I approached the task in the same way I approach any photo session, which is with an eye for what the design requires, balanced with what’s going to make the subject look their best.

Having no wish to bang on about how great I am (I’m not great, just passionate about doing my best), I’ll leave you with an example of one of the photos I shot and the email Suzanne sent me after I’d sent her the results. 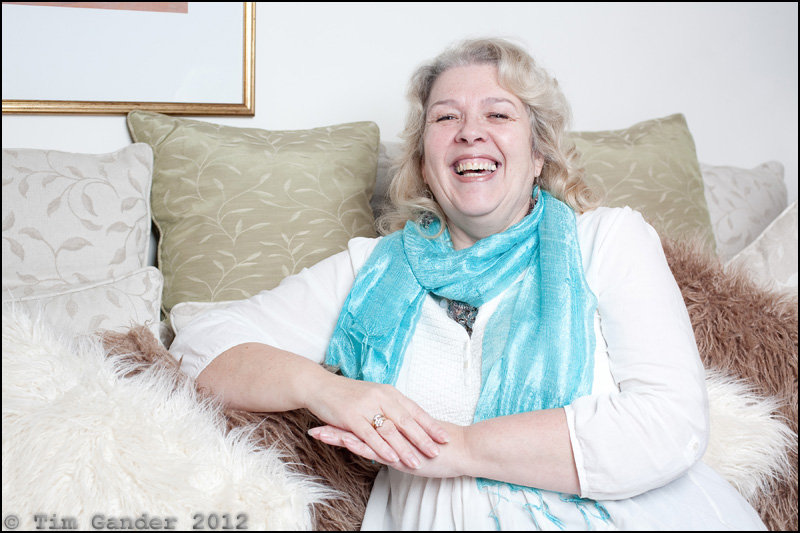 We had a laugh or two. The idea was to show Suzanne in the context of her treatment room 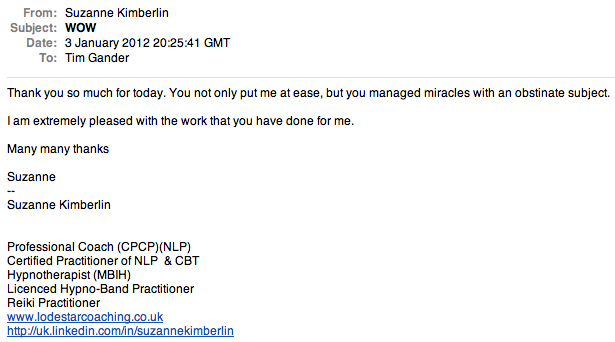 It’s inevitable that if a client retains you for long enough, eventually you’ll end up repeating a previous job.

This might be as simple as updating a portrait of the CEO, and you’re not normally looking to reinvent the wheel in that scenario unless the company imagery needs a change of style. On other occasions it’s about finding a fresh way to re-photograph an older idea.

Such it was last November when Wickes asked me to repeat what I’d done for them in a previous year. That is say, a press shot to illustrate the story that their call-centre colleagues would be operating the switchboard into the night in order to take pledges for Children in Need. 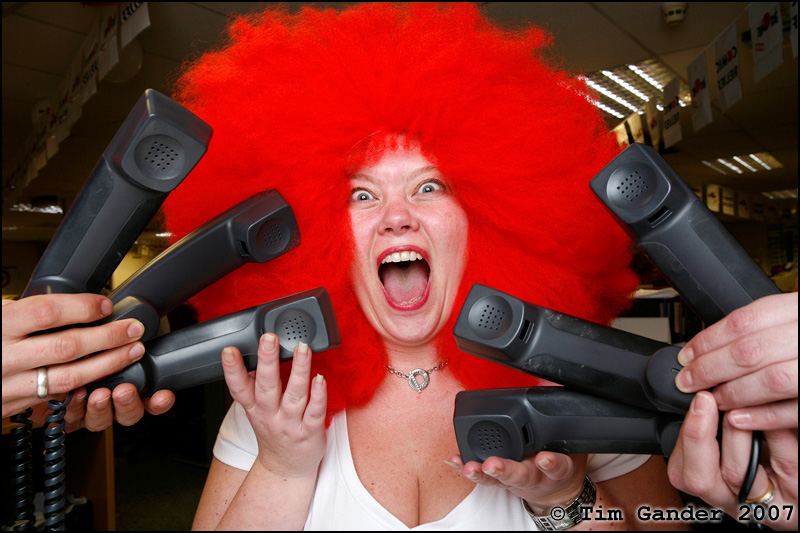 Hardly an original idea, but the wig, expression and phone receivers make it eye-catching

The lady in the red wig was the shot which went out previously, and it was very well received, but of course I didn’t simply want to repeat that. I had to come up with something similar, but not the same.

Luckily this time around the props were different, but the setting was the same – a dark, messy open-plan office space with light which wasn’t going to work for pictures. I decided to use the Pudsey Bear bunting and a different floor of the office which was closed for the night, therefore I could set up lighting and spend some time with the model photographing her away from all her colleagues to reduce the embarrassment factor. 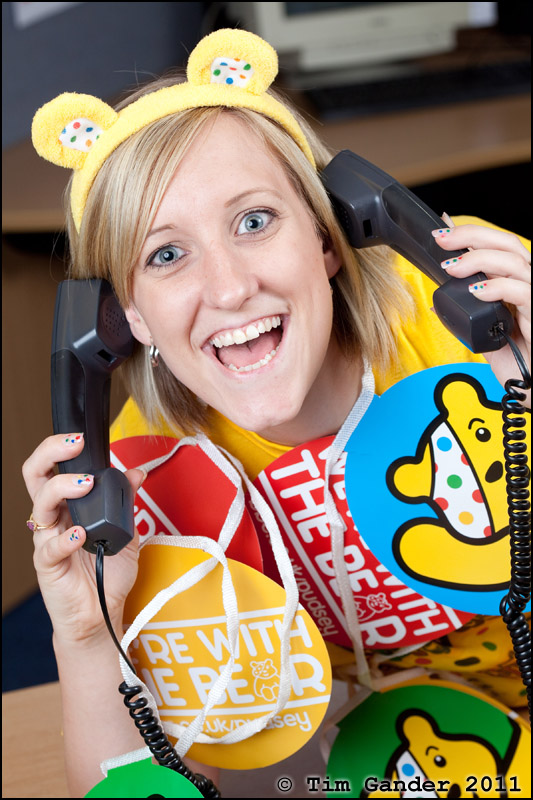 The results convey a similar energy and use much the same “tight” newspaper style, but the content of the picture is subtly updated and more of the Children in Need branding is included, which I think helps to tell the story even more fully.

You might think it would be boring to have to repeat something previously photographed, but for me it was more of a challenge to come up with something new, and I enjoyed the challenge enormously. The thing about photography is you can always update and improve a good idea. 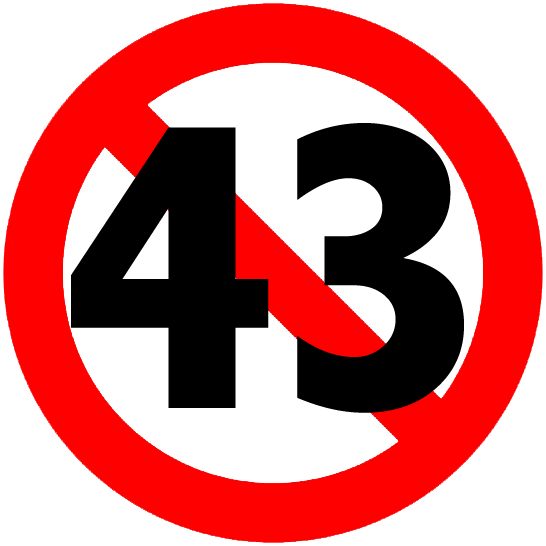 Christine Mosler, aged 44, is a freelance writer living in Frome.

What camera kit are you currently using? Nikon D40x and my iphone.

What pictures do you most like to take? Candid shots of people, I’m taking a lot of photos of trees and also a lot of food for my new food blog. Buildings from odd angles. Reflections in water…Pictures of water, especially ripples…anything which catches my eye basically!

What was your most recent picture? Narcissus Grandiflora Paperwhite.

What picture are you most proud of taking? The one of Dulsa in Mozambique is hard to beat. I followed a vaccine from the UK to her leg as part of my trip with Save the Children. 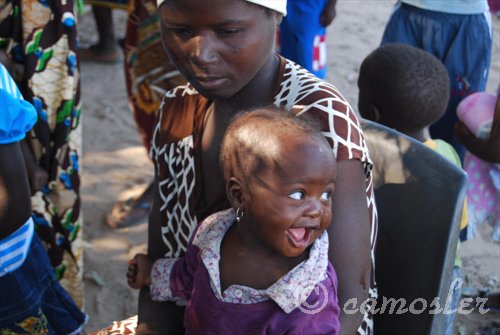 Do you have a website/flickr feed etc we can see? My blog is Thinly Spread. My new food blog (work in progress) is Fab Food. I have a neglected Posterous account here and I am on instagram as chrismosler 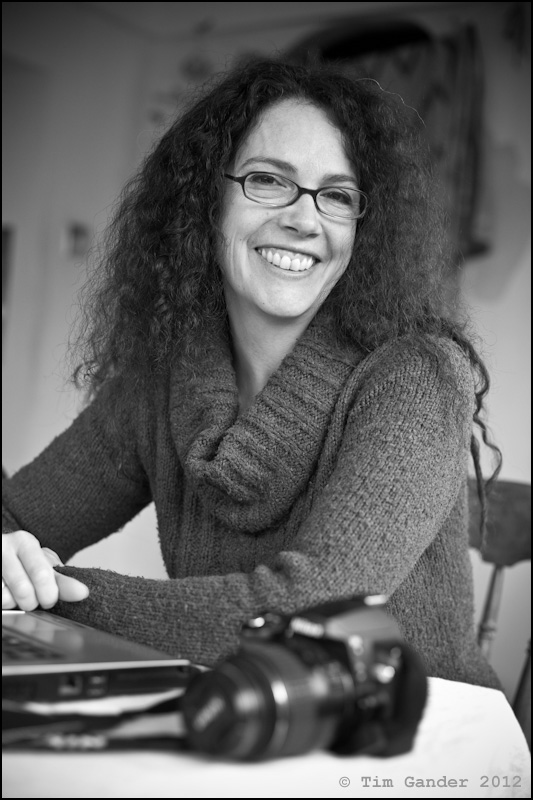 Christine Mosler is rapidly building a reputation as a freelance writer and blogger.

If you could improve one area of your photography, what would it be? I would like to resist the automatic setting more than I do!

If you could like to go pro, what kind of work would you shoot? I’d love to do more work with charities in the field. I have so enjoyed taking photographs which have had a massive impact on others who have no obligation to say…’ooh nice shot’!

If you could have taken one great photo, what would it be? (this can be a photo which already exists or an event of which no photo was taken). I would love to have been there when Nelson Mandela took his long walk to freedom. I’d also like to have taken a good picture of my Gran before she died because I was a bit rubbish back then!

Thank you for your time Christine.