Cranmore Tower, off which I shall be jumping for charidee

A bank holiday week means no one will be reading this, so I thought I’d sneak in a bit of a charity appeal.

On September 15th myself and a number of colleagues from The Old Church School offices where I’m based will be taking a zip wire challenge off the top of Cranmore Tower, a 19th Century Victorian folly. It’ll be a 100 metre long wire from a height of 148 feet (the wire is metric, the tower is imperial). A reasonable height then.

Money raised through sponsorship will go to SOS Africa, which is “a small, non-profit, UK registered, predominantly volunteer-run Somerset charity, which funds the education and care of underprivileged African township children.”

I’m paying to jump off the tower, but anything I can raise from you good folk will help the chillun (less justgiving’s cut I guess). It beats climbing Mount Kilimanjaro which requires huge amounts of sponsorship, a comparatively large carbon footprint and just means I get a free holiday and a smug glow. This way I just get the smug glow, though that might be cancelled out if I spend the entire 100 metres screaming like a big girl’s blouse.

If you would like to chuck some money in the pot, go here. You never know, if you raise enough money I might do it naked. Raise even more, I’ll keep my clothes on. 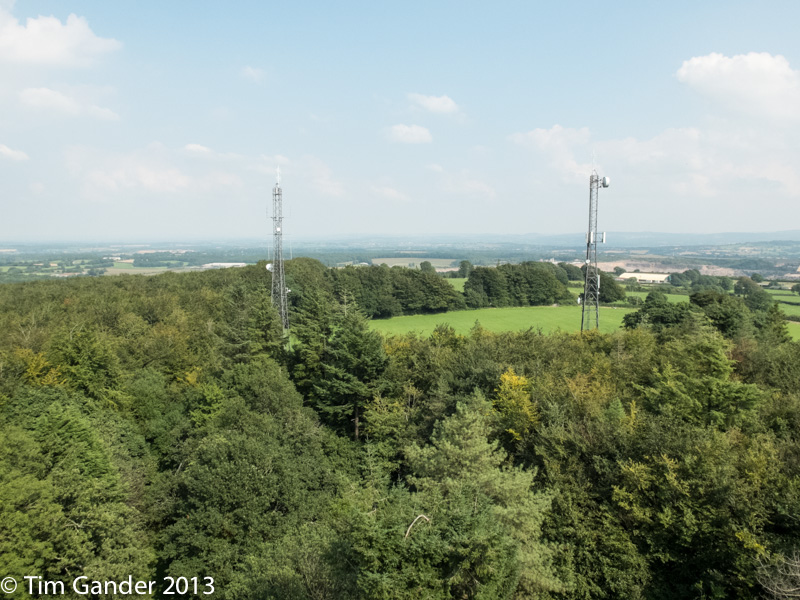 Spectacular views from the top of the tower. Slightly stomach-churning when you look down. 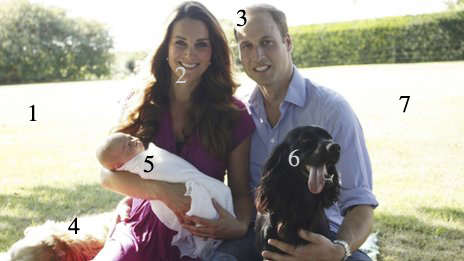 I can’t really write about business this week, not after the weekend I’ve just had. If google wants feeding with keywords such as commercial photographer, press photographer in Somerset covering Bath and Bristol, it’ll have to look elsewhere (see what I did there?)

No, this week I have to tell you about my weekend bike ride with colleagues from The Old Church School (TOCS) in Frome, where my office is based. Ryan, recently qualified TOCS apprentice and resident cycling nut, decided to organise a little Saturday jaunt which anyone within the building could sign up to. It just happened to coincide with a free weekend for me, so I signed up. 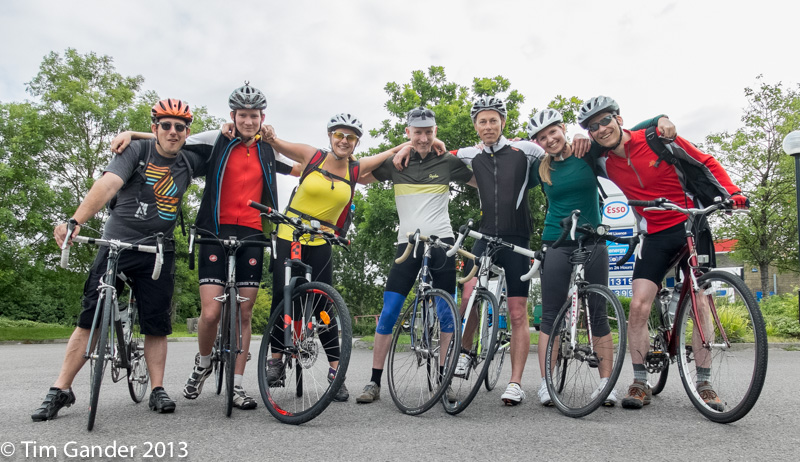 Originally I was told it was a 60 mile ride down to Branscombe on the South Devon coast, camping overnight and returning on Sunday by train or bike if preferred. I was tempted by the thought of cycling back on the Sunday, but the train prevailed in the event.

The longest ride I’ve ever done previously was a 46 mile circuit which meant I got to sleep in my own bed the same night. This trip would be a whole new experience for me and turned out to be over 70 miles door-to-tent-flap, including some hills that were put there to prove God hates cyclists.

I won’t bore you with a mile-by-mile account, but there were seven of us that set off from Frome on what would transpire to be the best part of 11 hours on the road including stops.

Some in our group were clearly seasoned cyclists, with Ryan heading the way as navigator going strong all the way and who cycled all the way home the next day. Did I mention he’s a nut?

I wanted to take some photos of the journey, but it’s funny how when I need to take snaps I struggle. I was enjoying the cycling and of course every time we stopped I was having to drink and take in food like everyone else. Not too much time for getting the camera out, but a few iPhone photos and the occasional shot on my Fuji X20 meant the event didn’t go completely unrecorded. 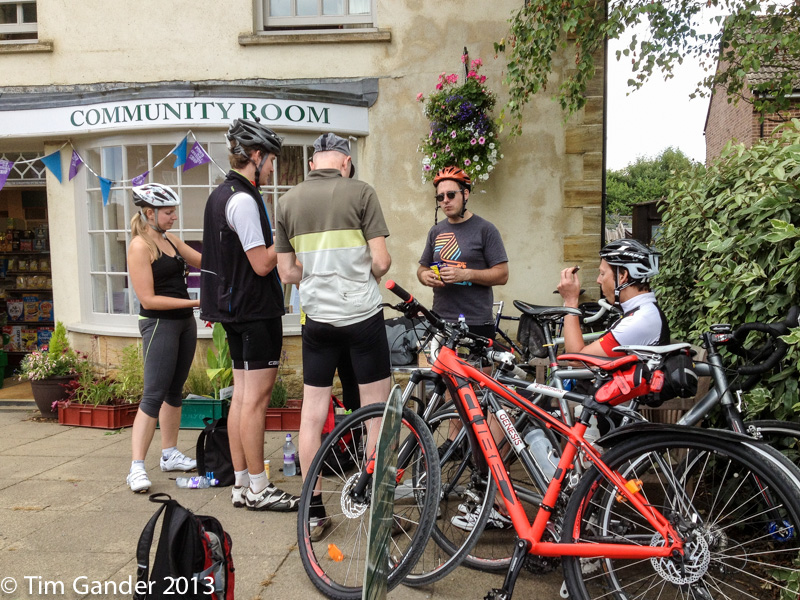 Village shops were invaded by Lycra-clad, sweaty cyclists in need of sugar, carbs and water

We all rode pretty strongly until the very last few hills to our campsite just beyond Branscombe when Jennie, Gavin and myself started to find our legs had nothing left. Ryan, unbelievably, took turns with Jennie and I, riding up behind us and giving us a push up the penultimate hill. It was like having a jet pack strapped to your back. He must have been exhausted too, but he also knew we had to get to the campsite or sleep in a ditch.

Having beaten that hill there was a brief respite from the slog, but when we got to the foot of the very final climb to the campsite to see the warning sign which indicated a 20% ascent, three of us had to resign and walk it, which was pretty hard too. I must confess I was swearing a bit by this stage. Ryan, being nuttier than squirrel poo, cycled on up that hill like it wasn’t there. He showed God. 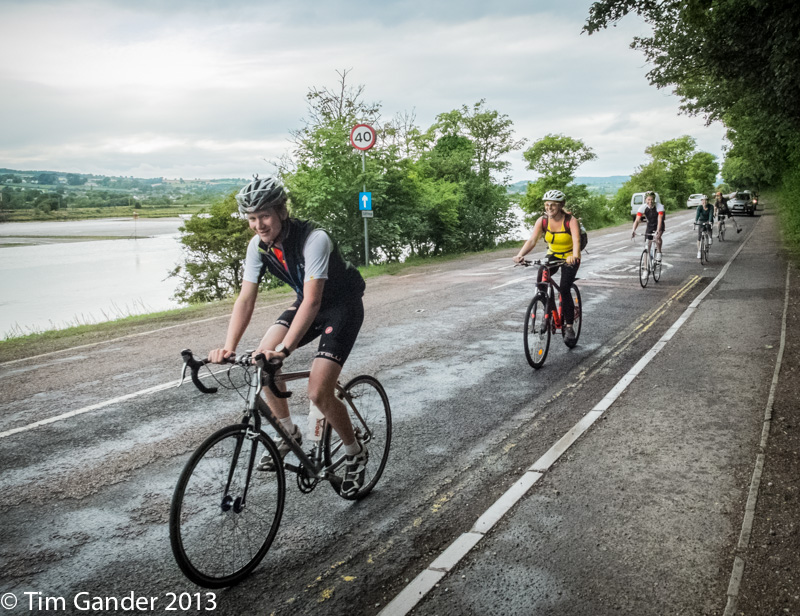 We’re still smiling at this stage. We had no idea the hills still to come

Anyway, we all managed to get there, had a fantastic meal (a drink or four) at the local pub and not much sleep under canvas.

The journey home the next day required a few more miles in the saddle (Ryan The Nut cycled all the way home), but I was chuffed to manage the first big ascent out of Branscombe, but once we got to Seaton it was clear we were going to struggle to make our train home, which was a few more miles away and we simply didn’t have the legs for it. Luckily I managed to track down one taxi driver who could help us and I’d like to say a big thank you to Floyds of Charmouth who came to our aid with a seven-seater which took the three of us and our bikes to Axminster station where we caught the train home. 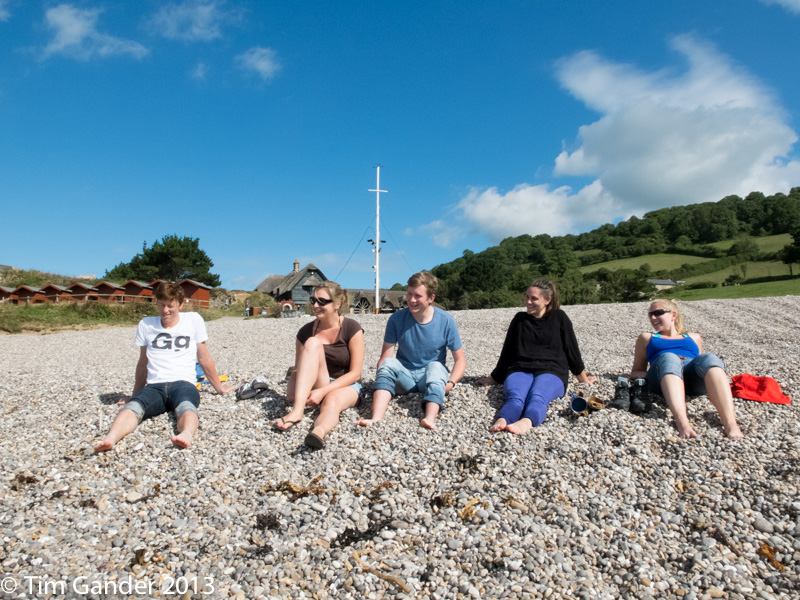 I wasn’t firing on all cylinders on Monday, but it was an excellent break for me and I’m so glad I did it. Given the opportunity, I’d do it again. Ryan’s nuttiness is clearly contagious. 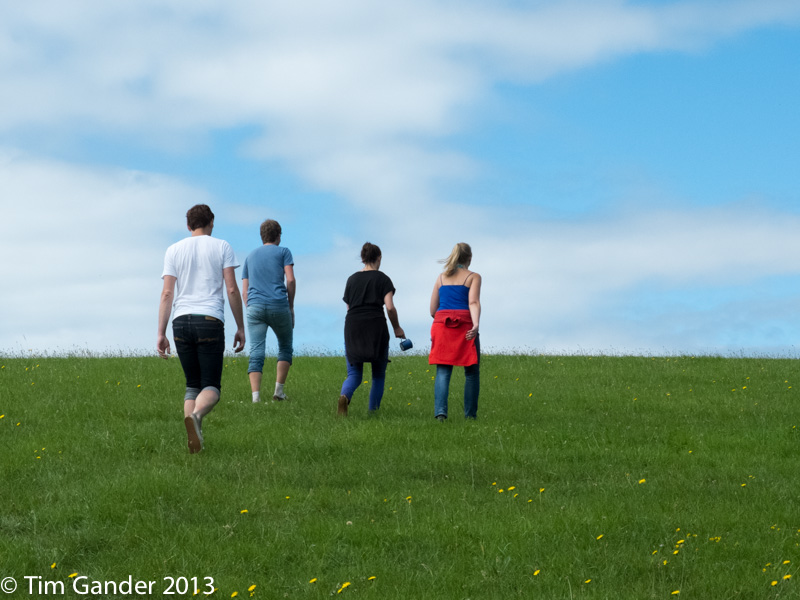 If you’re good at your job, you should be paid properly

That sentence, unremarkable in its state-the-bleedin’-obvious sort of way, came from the mouth of Sir Stephen Bubb, chief executive of the Association of Chief Executives of Voluntary Organisations. Suddenly, knowing who uttered that sentence makes it rather more remarkable because in many cases the charities which his organisation represents believe that photographers should be made to feel less of themselves if they refuse to work or supply pictures for free. Pictures which would help the charities raise funds far greater than the cost of paying someone to take or supply them.

Sir Stephen was on the BBC defending the high salaries paid to some charity chief executives. Salaries which in some cases are over £180,000 per annum. He was rather cross, putting it mildly, that The Telegraph had made a story of these high sums and said categorically that the charity CEOs should not be expected to work for free. Why, then, are photographers so often expected to work for free? Are they not professionals too? Do they not have families to support? Mortgages to pay? (Voluntary) charitable donations to make?

It goes without saying (usually a prequel to “I’ll say it anyway”) that I do believe charities, on the whole, do a good job. It’s also fair to say not all professionals working for charities get large salaries, even at chief executive level, but this story is extremely timely as I was chatting to an old photographer friend the other day who told me that, yet again, he had been asked to take photos for a charity for free. When he checked on that charity’s website and discovered that they did indeed have paid staff he declined on the basis that he shouldn’t be the only professional working for free for that organisation.

And his story isn’t an isolated incident. Charities tapping up photographers for freebies is a regular gripe on forums. I’ve also been asked to work for free or been told that my fees far outstripped the budget. Quite who sets the budgets is never clear; presumably a monkey with a broken abacus, because the budgets never make any sense.

The Telegraph story raises a serious question for charities: Do high CEO salaries damage the credibility of the charities they work for? Could this damage donations? I’ll answer one question for any charity which cares to listen and that is you already do a great deal of damage amongst large groups of photographers by constantly rattling your tin for free, highly skilled professional services by people who often live precarious lives themselves.

It does a charity no favours to make a photographer feel guilty for turning them away or by making them feel they’re being arm-twisted into making a donation often worth hundreds if not thousands of pounds in the form of free work.

And I’ll add that it upsets me that I even have to speak up on this issue because many do difficult and good work, but good images should not be expected for free and asking for them does very much harm the credibility of a charity.