Tea and a slice of budget anyone?

It seems to be a firmly-held view among some web designers that the cost of photography for a website is going to compete directly with the site’s design and construction budget. In other words, the designer’s precious fee.

A designer might fear that bringing a commercial photographer into the project will wipe out their profit. This belief, coupled with the line drilled into them at web design skool, “my clients don’t have a budget for photography” really is quite bizarre since photography for a website should also be incorporated into other marketing devices such as printed brochures, press releases, leaflets and other electronic media.

In other words, the photography shouldn’t come entirely out of the web budget, if at all. Of course the photography will be used in the website, and the client will need to factor in the cost of any additional photography required for the site, but the cost should be largely coming out of the wider marketing budget. Unlike the web design, photographs can be translated easily from one medium to another. Try turning a website directly into a printed brochure, and you’ll start to get an idea of the limitations on uses for a web design.

The other benefit of using commissioned photography is that the images will help maintain consistency of look and message between web and printed media. The client won’t have such a mish-mash of imagery, so their customers won’t be confused about what they’re looking at or who they’re dealing with. 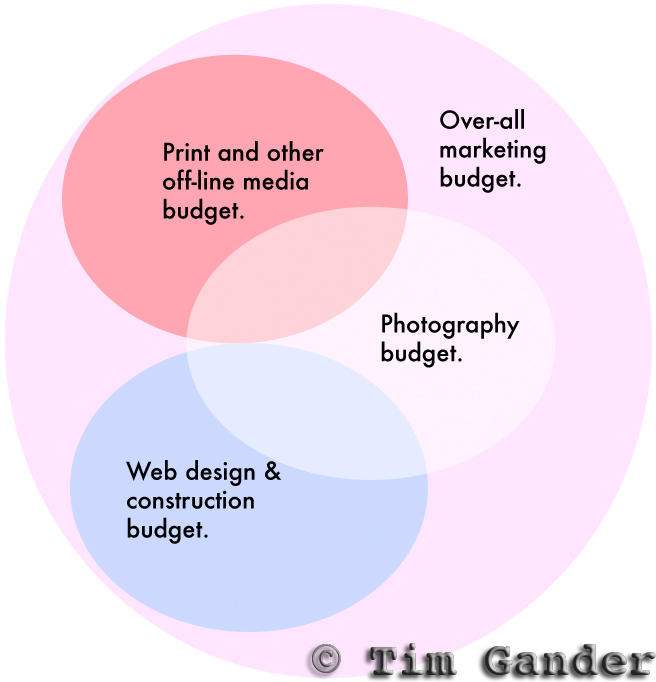 I have no budget for designers, so made this myself. Isn’t it kool?

What the above graphic is trying to show you is that if a client is sourcing images from a proper commercial photographer, rather than letting the designer spend hours trawling the microstock photography sites, they will get quality images which will be used in the wider marketing context, not just the website.

It’s also worth remembering that when a designer or client buys a royalty-free stock image they are only buying a licence for one media. In other words, buy a web image from iStockphoto and you can only use that image in the client website and nothing else. Buy an image for print media, and you won’t be licensed to use it in web media. If you want to use the same images for web and print, you have to buy each image twice – one licence for each use, which can start to get complicated and expensive.

Other benefits of buying directly from the photographer; the client gets better, more personal service and photos more directly matched to their requirements without hours of trawling stock sites (time which either the client pays for, or the designer has to swallow as a cost to themselves), and the client gets more flexible use of the images. Of course copyright still resides with the photographer, but negotiating a flexible licence with the photographer is much simpler than trying to haggle with a faceless giant of a stock library, plus the chances of being sued for breach of copyright are much reduced when dealing direct.

Bear in mind that if the client is considering having a new brochure or annual report done around the same time as giving their website a facelift, the cost of photography can be spread across all these different media and uses. So it’s clear that the photography budget isn’t coming entirely out of the designer’s slice of the money pie, but the designer can still influence the look, feel and content of the images. Now, doesn’t that sound sweet? Time for tea…

I’m sorry, your credit’s no good.

“If bylines were money, I’d have paid off the mortgage by now” so the saying I just made up goes.

Last week somebody emailed me saying they’d seen a photo on my blog which they liked, and could they reproduce it in their magazine. Of course they couldn’t pay me, but I’d get a byline next to the photo.

While trying to hammer out this article I received an email from someone else, working for a large representative trade body, asking if they could use one of my photos in a report. Again, payment would be in the form of “Photo by Tim Gander.”

I’m going to hazard a guess that there are people out there who live in a world where they work hard, but for no money whatsoever. They don’t need to because in the night while they’re asleep, the food fairies come and stock the fridge; the pixies and the mice come and sew beautiful clothes and shoes for them, working until their teeny tiny fingers bleed, so that when the magazine editor and the corporate communications director come down to a breakfast of fairy-baked muffins and Fairtrade coffee, everything they need is there for them. And they can leave the house they built out of hugs and smiles, drive to the office in the car that runs on love and angel wings, to put in another day’s unpaid graft.

This must be the case, because they assume I can work for free too. Unfortunately (despite my excellently fairytale surname) I don’t own a goose that lays golden eggs. My house isn’t visited in the night by waistcoated mice with sewing needles and bolts of beautiful yarn. 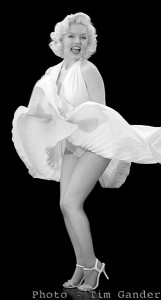 A favourite request is for this Monroe lookalike shot.

Here’s the problem I have; I tried offering a brown envelope stuffed with bylined cuttings to my bank manager to pay off some of the mortgage, but apparently these are no longer considered legal tender in this country. They must have been once because the byline seems such a popular form of payment. Don’t get me wrong, bylines are nice but few people look at them, and they very rarely bring in new work. They do more for the photographer’s ego than his/ her bank balance.

A byline shouldn’t be seen as an alternative to payment. And the way web theft is going, I would go as far as to say that crediting the photographer in online use should become mandatory in all but the most tightly defined exceptions.

Personally, I love to help people whenever I can, but I can’t afford to give my work away for free. I don’t know anyone who can, and certainly not at the frequency with which these requests come to me. I’d also risk the wrath of fee-paying clients who have bought licences to my images.

I suppose I should be grateful that some people are still honest enough to ask, rather than just going ahead and stealing the photo and using it anyway. If you want a textbook example of wholesale copyright theft and its consequences, read up on the case of EPUK v LPA as it highlights the schism between what some people believe is perfectly acceptable netiquette, and what right-thinking people would view as theft. That story is still rumbling on, so I’ll leave it there as a festering reminder of what happens when people nick stuff off the web.

In the meantime, I’ll be happy that people ask me if they can use my work, so long as they’re not offended when I say yes, but not for free. Last time I checked, Tesco don’t accept my bylines either.

Face Up to Portrait Fears

Recently I’ve been asked to shoot a lot, and I mean A LOT, of corporate portraits for many different clients. It tends to go like this; slightly nervous office staff shuffle into the broom cupboard I’ve been assigned to as my portable studio for the day, and I have to stop them hyperventilating with fear at least until I can get a nice photo of their smiling face, preferably with eyes open and a minimum of sweat shine on their noses.

I understand the fear. I too am not delighted when someone points a camera at me, so I feel their pain. That’s why I try to settle the sitter, crack some bad jokes, and be as quick as possible.

However, there is another way. Not to say that the standard portrait isn’t important and useful, but if you’re trying to arrange a photo shoot for a collection of colleagues who break out in hives at the thought of looking into my dead, glassy eye, perhaps the candid portrait would be a better option.

In this scenario you can gather a selection of people around a table and get them chatting while I work around the group, capturing smiling, positive expressions. Lay on some coffee, biscuits (cookies for our American friends), or water and let people chat, relax and forget that I’m there. They might use the time to discuss some project that they’re planning, or just have a bit of a social. Within minutes they’ll forget I’m there, and it’ll show in the photos. 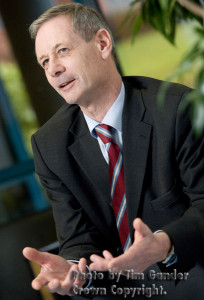 Chatting to a colleague takes the mind off being photographed.

Another option is to have colleagues come to me in pairs. One of the pair will be photographed while the other chats to them, tells jokes and makes them laugh and interact. They won’t be looking into camera, but as with the round-table discussion shots it’s a way of relaxing people into the photo session. It creates more dynamic images which can be useful for more than just the About Us section of the website, and you’ll have a broader choice of angles and expressions so pictures on the website can be periodically refreshed, and pictures in a brochure can be different from those on the website.

In any event, I can always finish off with a final shot to camera, by which time the sitter should be relaxed enough to give a more natural smile.

I’ve blogged before about why decent portraits are important, but at the risk of repeating myself, these photos are generally used on business websites in the About Us section, or in corporate literature. They are the World’s window on the people that make up the business and those photos are the first impression anyone gets of the business. The photos will be used repeatedly and different contexts, each time making a first impression on someone new. So if you’re going to spend good time, money and fear on corporate portraits, consider the options I’ve set out. It really doesn’t need to be as painful as route canal work. At least not always.