Happy New Year to all my lovely readers, I hope you all had a fun Christmas and that 2016 brings nothing but good stuff.

Photographically I had a pretty hectic Christmas because I’d decided that since my travels would take in Austria, Switzerland, France and Germany, I really should make the most of this and come up with some kind of mini photographic project to share on my return. Besides the inevitable holiday photos, I already had a couple of mini projects lined up, but these were for clients and I wanted something I could work into a narrative post.

Taking in four countries didn’t mean huge distances were travelled, we (my partner and I) just happened to start in Austria and then went to stay with friends in a corner of France which converges with Switzerland and Germany.

In fact the border area on the outskirts of Basel in Switzerland is so complicated that I quickly turned my attention to this as the focus of my project. I only had a few hours to get the project shot, but here’s a flavour of what I found.

Basel itself is a pretty city with historic winding streets, a handsome waterfront and grand public buildings, but I’m not so drawn to photographing obviously pretty places, and I was more intrigued by the area we were staying in; Huningue in France and Weil am Rhein in Germany.

One feature of this district is a huge shopping mall where Swiss residents take advantage of the cost of living differential by making a tram trip from Switzerland (incredibly expensive) to Germany (cheaper), their destination being the Rhein Centre where they shop for food, clothes and electrical items without the Swiss premium. 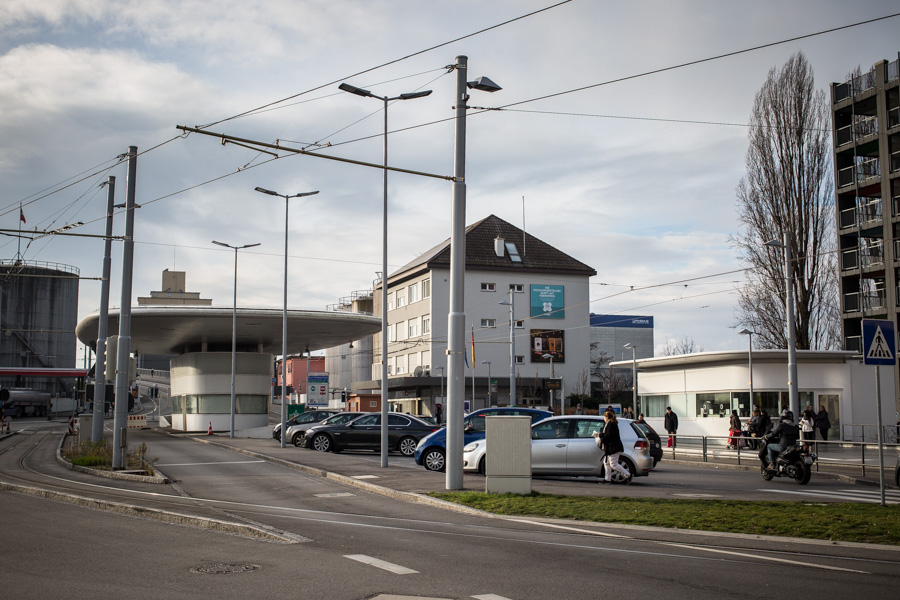 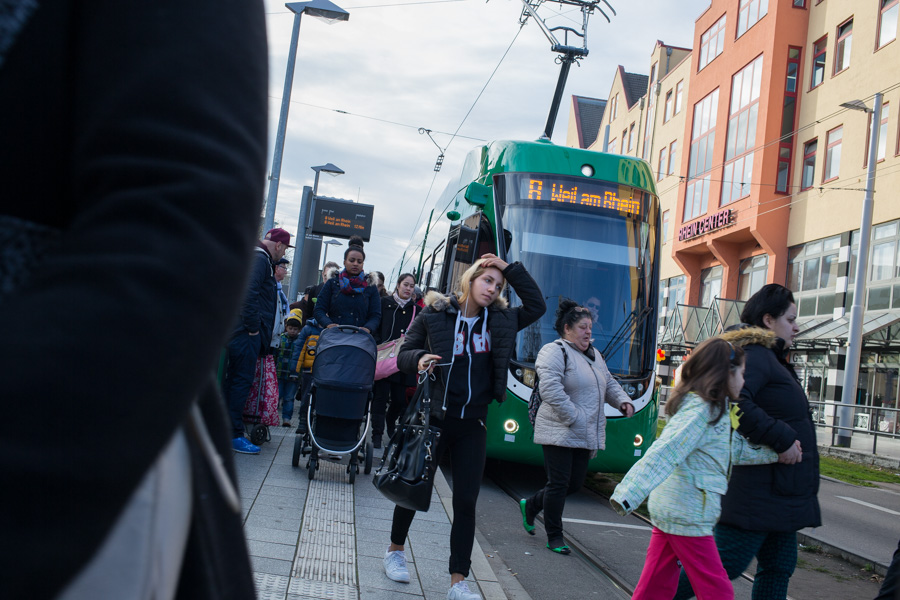 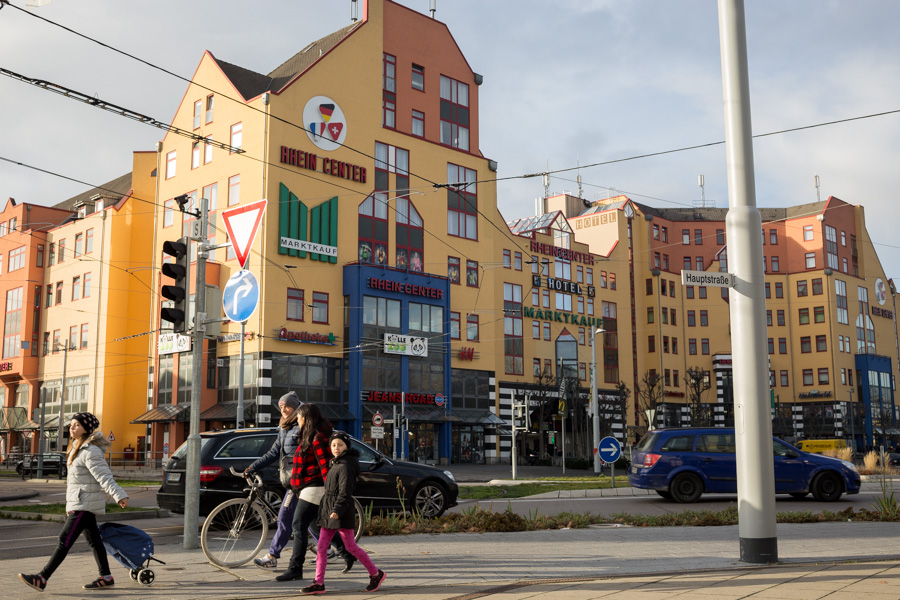 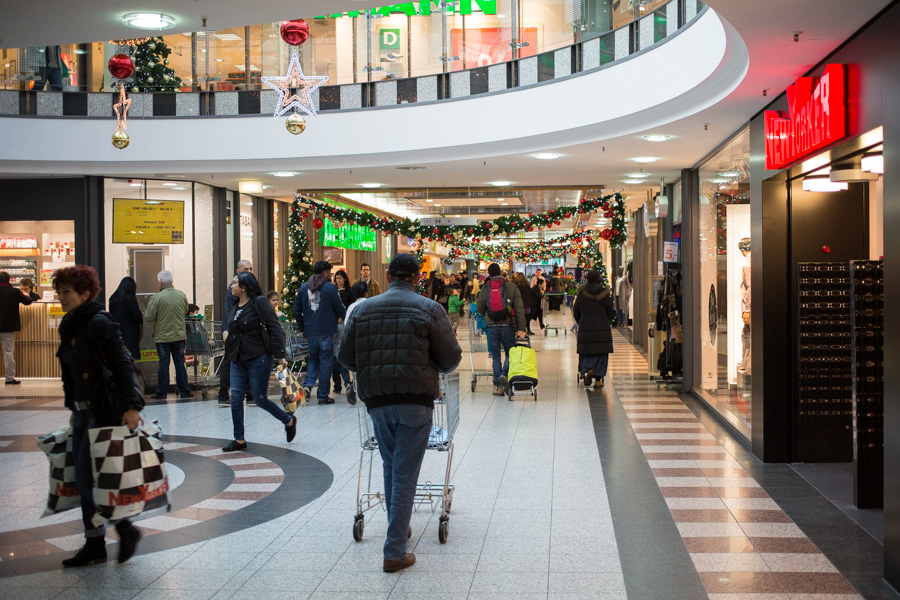 Inside The Rhein Centre 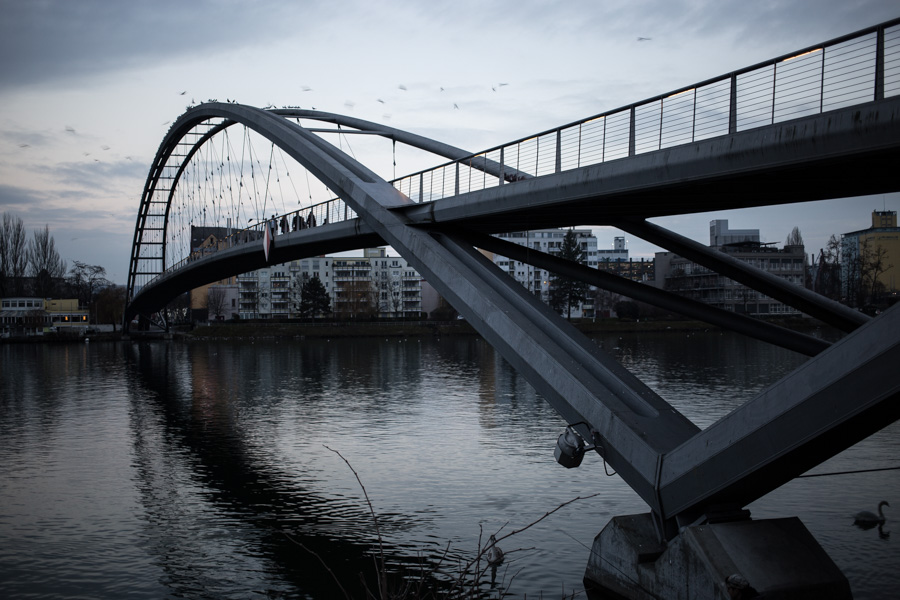 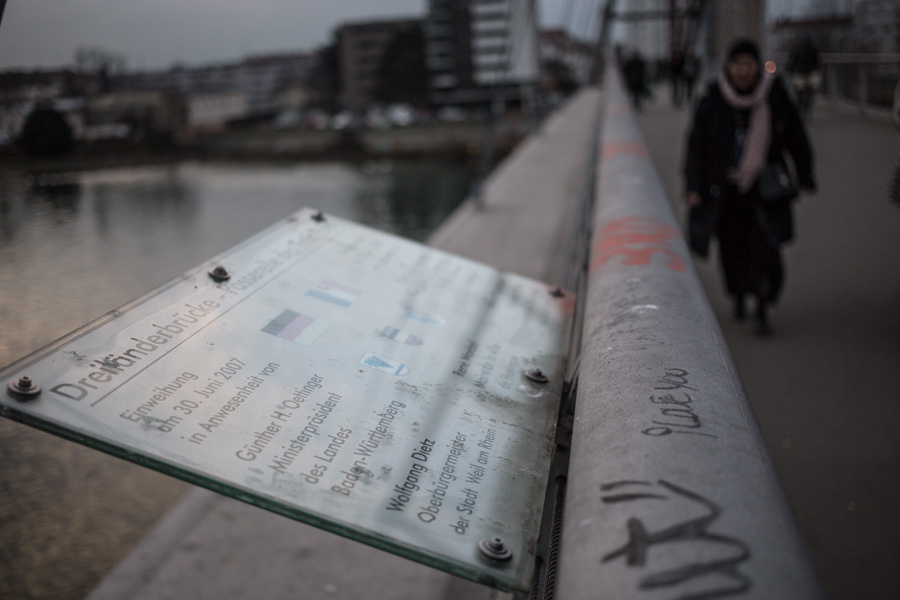 Border on the bridge 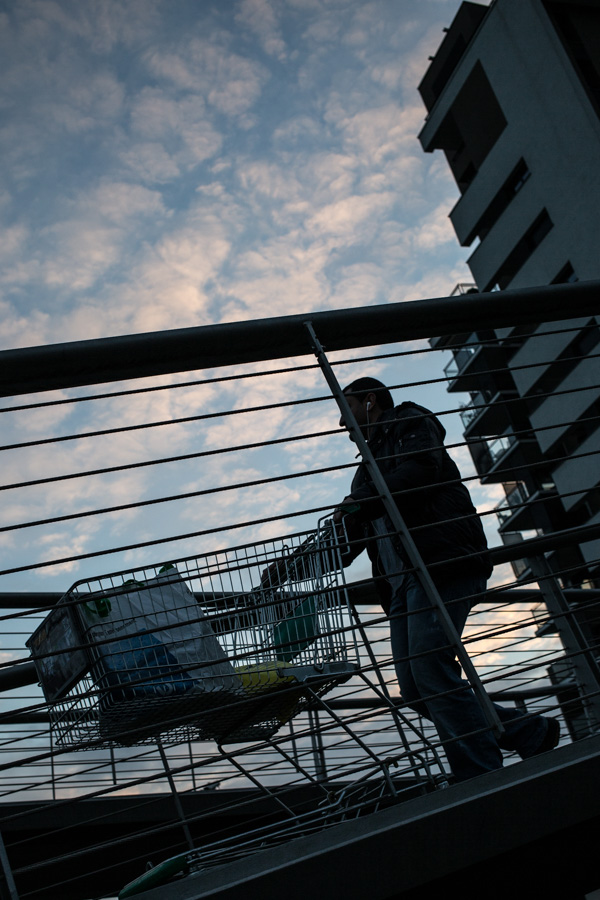 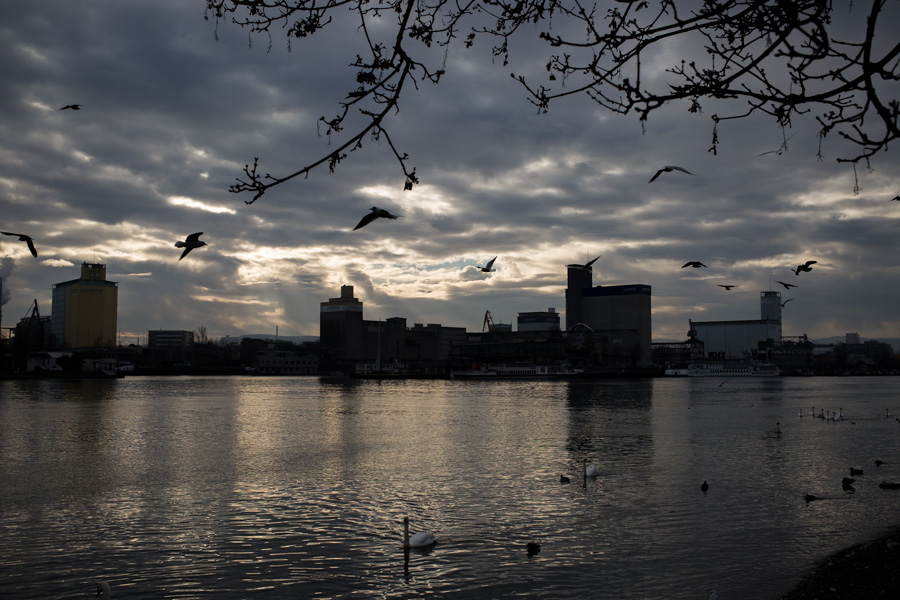 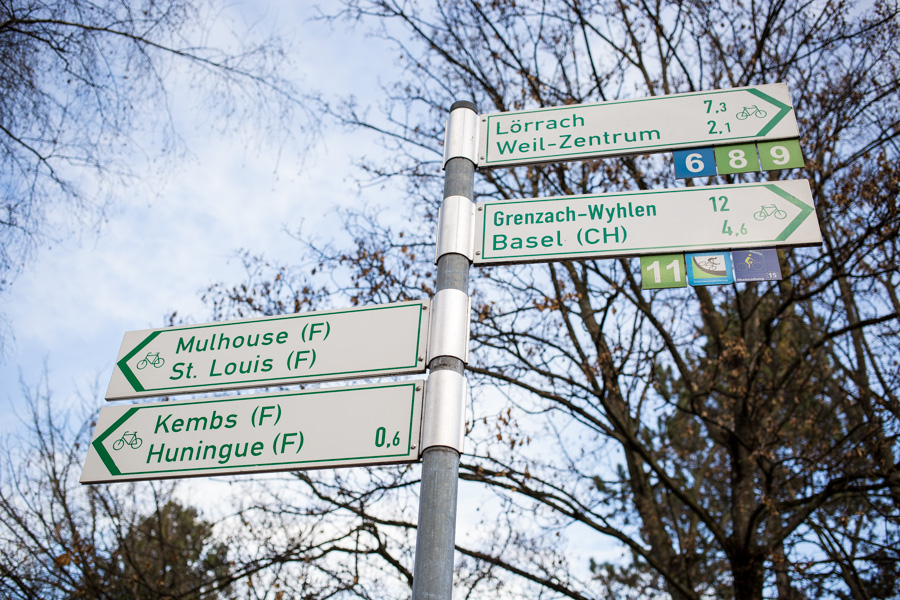 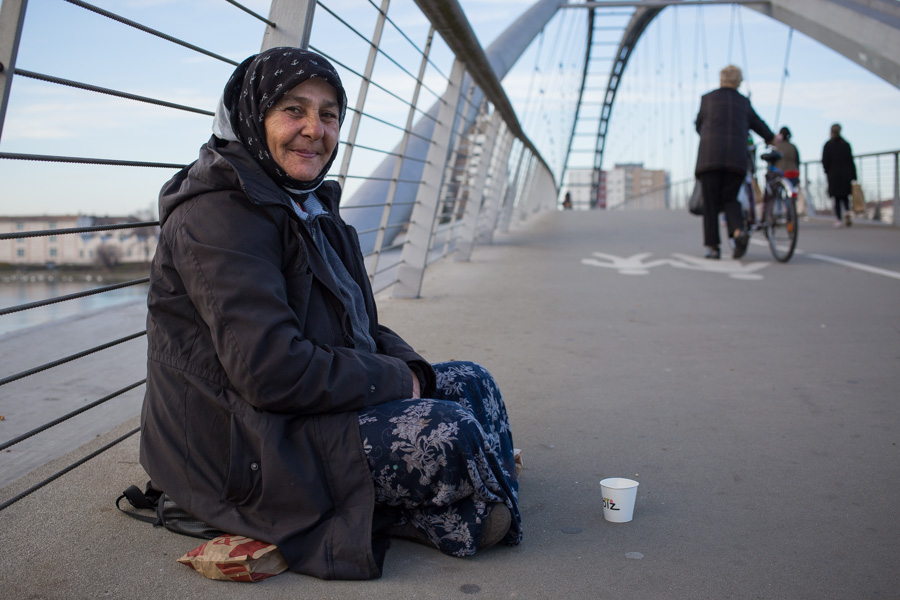 "Bulgaria" was all she would say

The tram passes through Swiss/German border controls without let or hindrance thanks to the Schengen agreement between European countries. Though there is a border station there it seemed mostly shut for Christmas and I don’t imagine border guards check passenger passports very often.

Even more open is the border between Germany and France which is literally a few hundred yards down the road from the Swiss/German border. A bridge (Dreiländerbrücke / Passerelle des Trois Pays) joins the two countries and hundreds of people cross by foot or on pushbikes every day. It’s rather like any bridge in any town except it has a plaque and a pair of flags to denote the joining of the countries.

In this segment of Europe a walk in the town or countryside will involve crossing various borders with often little more than a small sign on a metal post to let you know which country you’re in. There were times when I lost track of which half-remembered language I was supposed to be speaking, but I don’t think I embarrassed myself too badly.

This is an area I’d be interested in returning to as there seems to be more than one story quietly playing out against the domestic and industrial backdrop. Youth culture, poverty and the social mix would all be interesting subjects given enough time to cover them. In the meantime, I’d best brush up on my French, German and Swiss-German at the very least before I go again.