Yes, that’s a misquote of the often used “the economy, stupid,” but I thought I’d throw a few thoughts out there about the economy because I covered an “economic dinner” last week (it was a dinner for economists, not a low-budget supper) at which one of the guest speakers was Andy Haldane of the Bank of England.

There was much talk of the economy, interest rates, access to finance and so on, and while I don’t hear everything at these kinds of events on account of I’m busy concentrating on camera and flash settings, angles, focus, and composition, I do get the gist of what’s being said.

But why should anyone care what I, a mere photographer, think is happening with the economy? Why indeed, though it’s fair to say most economists seem to be equally ill-equipped to understand all the statistics about employment, productivity and forecasts on where the economy is headed, so I may as well give it a shot. 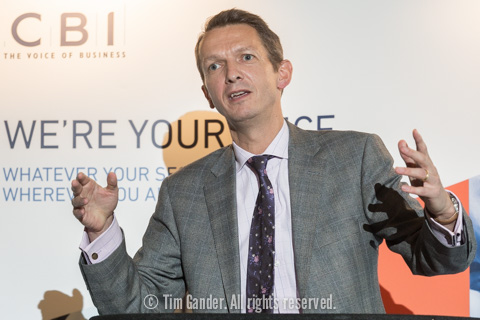 I was at another function earlier in the year and was approached by a representative of the Bank of England who I thought was going to ask me something to do with photography. Instead he asked me how my business was doing because, he said, “I suspect someone in your line of work feels the ups and downs of the economy rather more immediately than many others.”

I think he’s probably right. Commercial photographers often feel the start of a bust almost before it’s happened because while companies might feel they’re working in isolation and cutting their marketing budgets ahead of an expected downturn, when enough of them do this the photographer feels the downturn before it officially hits. I experienced this in 2008 not long after Northern Rock hit the rocks.

So where are we now and where are we going? Well for a start I’m happy to report that things have picked up over the last two or three years. My turnover is back to where it was pre-crash, and actually marginally up, but it all still feels rather delicate.

Company budgets are still very much under constant revision and my turnover is up because I’ve had more bookings, not because I’ve put my fees up. In fact my fees haven’t changed significantly in about four years.

What can be hard to separate out is whether businesses are booking more photography because they’re feeling more confident or because they’re trying to make up for lost ground having slashed marketing budgets in 2008. I can only speak anecdotally, but I’d say it’s a mixture with a tilt in favour of the latter.

Businesses which have held back spending on photography for more than a couple of years often find that when they come back to review their marketing plans, they’re lacking in pertinent pictures and often have to restart their picture library from scratch. This can be an expensive process, and might force some to further delay commissioning new work. It can become a bit of a vicious cycle.

Then when the decision is made to give the go-ahead on new imagery, because so much is required to recover lost ground it’s understandable that there is some pressure to keep costs down. The end result is, I get more work but I can’t charge any more than I was a few years ago. Many businesses find themselves in a bit of a limbo situation like this.

It really doesn’t require an economist to tell you that the “recovery” is going to be slow and vulnerable. The debt bubble is still in the economy. It was with the banks, now it’s been spread amongst us all, but it is still there and getting worse. This is keeping everyone, businesses and individuals alike, nervous. Of course my best advice would be to not slash your marketing budget (I would say that, wouldn’t I) because it’ll harm your chances of finding new business and retaining existing clients and it’ll cost more to re-start it later.

Now my thoughts on the economy might not be detailed and in-depth, but like any astrologer, if I remain vague I can’t be accused of being wrong can I? Famous last words.