Learning to Assist, Assisting to Learn

The work of a business or corporate communications photographer (which is what I do) is rather different from that of a truly commercial one, by which I mean a photographer who shoots commercial images for advertising campaigns.

Most of what I do is pictures for business communications (website, brochures, press releases and so on), which while it’s commercial in the sense that I make money from my work, it’s not commercial in the strict photography business sense of being for commercials/adverts.

That may seem like a rather fine, specific point to open an article with, but it’s pertinent here because a few weeks ago I found myself assisting a commercial (as in advertising) photographer.

Now the other stand-out point of this article is that I was assisting another photographer at all. In 30 years of being a professional photographer I have never assisted, but when I was asked if I’d be interested in helping with a series of shoots I didn’t have to think too hard about whether or not to dive in.

The thing is, assisting is one of the best ways to learn and evolve as a photographer. I never did it because I trained as a press photographer and cut my teeth with news photography at college and local papers. This was a typical career path for many newspaper photographers.

For commercial and studio photographers, assisting was the way to learn the ropes, develop techniques and evolve your own style.

If I have one gripe about those starting out as photographers now (ok, I may have more than one gripe, but let’s keep this brief), it’s that too many of them think that to be a commercial photographer, all you need to do is read the camera manual and start taking pictures. If a friend or your mum tells you your pictures are nice, you launch a website and hey presto you’re a fully-fledged commercial pro. Believe me, without a few years of assisting, training and a baptism or two by fire, this just isn’t going to cut it.

Anyway, back to the plot. In my case, the call came from friend, fellow photographer and all-round-good-egg Jon Raine whose work you really should take a look at.

Jon’s background is very much in the commercial sphere, shooting pictures for big brands, and one of his regular gigs has been to take portraits of TalkSport presenters which is what he was asking me to assist him with on this occasion. 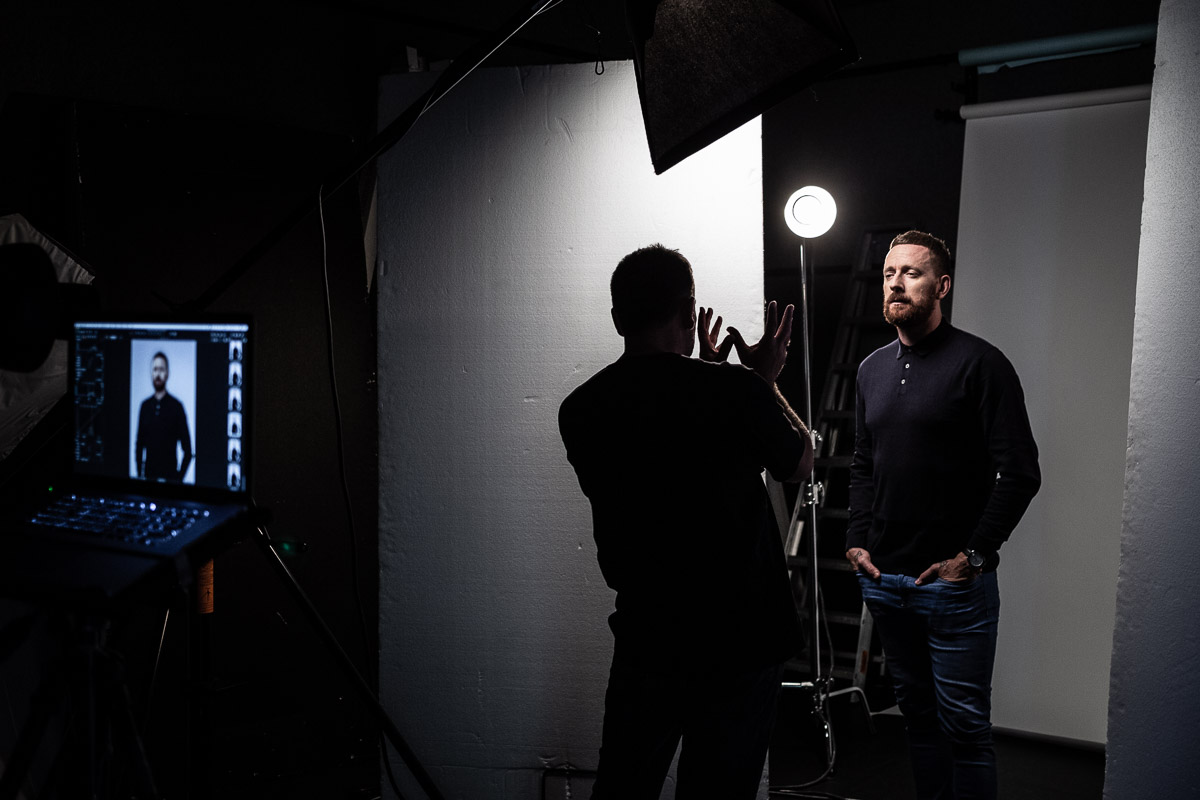 The obvious benefit of this gig for me was to work alongside someone who has deep experience as both a photographer and a commercial art director. Seeing how Jon plans and executes his work was a great insight, as was seeing the similarities between his methods and mine. It helped reinforce some of my practices for me, which is also useful.

The benefit for Jon was not only that he got to listen to my jokes all day, but there were also one or two small tips I was able to offer back.

Also, being a photographer myself meant I knew what to look out for as his images came through to the laptop – an errant hair, a badly placed crease in a shirt or white fluff on a dark top (not always easy to spot until flash hits it).

Another advantage for Jon was that I could take behind the scenes photos while he worked, which he could then use for a record of his work and social media if he wished. Of course that was a mutual advantage because now I’m using one of the photos for this blog post, a BTS shot of Olympic champion and Tour de France winner Sir Bradley Wiggins.

So everyone’s a winner! Including the subject.