Every few years I’ll give in to temptation and pay a visit to the biannual Frome Wessex Camera Club camera fair held at the Cheese and Grain in Frome (you know, that place the Foo Fighters did a surprise gig in once; you must know where I mean).

I’m not a natural fan of camera fairs; I think I got over the thrill of standing in a room full of expensive gear I couldn’t afford as a shop assistant some time around 1989.

However the evening before the fair was on, a friend called and asked if I fancied meeting him there. The peculiar thing was, up to the point of that phone call I was oblivious the event was on.

At first I was reticent, but he’d only recently asked if I wanted to meet at another camera fair and I’d turned him down for that one. To avoid looking like a curmudgeonly hermit, I sad yes this time.

So rather than having gear acquisition as my primary plan, I decided to use it as an excuse not only to see my friend, but also to test out and shoot some Ilford Delta 400 film rated at 1600. I’d shot some during my recent trip to Bologna, rated at 400, but I wanted to find the parameters of what this film can do and the flat, poor lighting in the Cheese and Grain is the perfect scenario for this. I thought I might get some interesting photos too.

Well the exercise was a useful one, even if the resulting images aren’t exactly dynamite. At least I know now this is a brilliantly versatile film, but for some reason I couldn’t ‘get my eye in’ so the photos are what they are. I’m posting them here to shame myself into doing better next time. 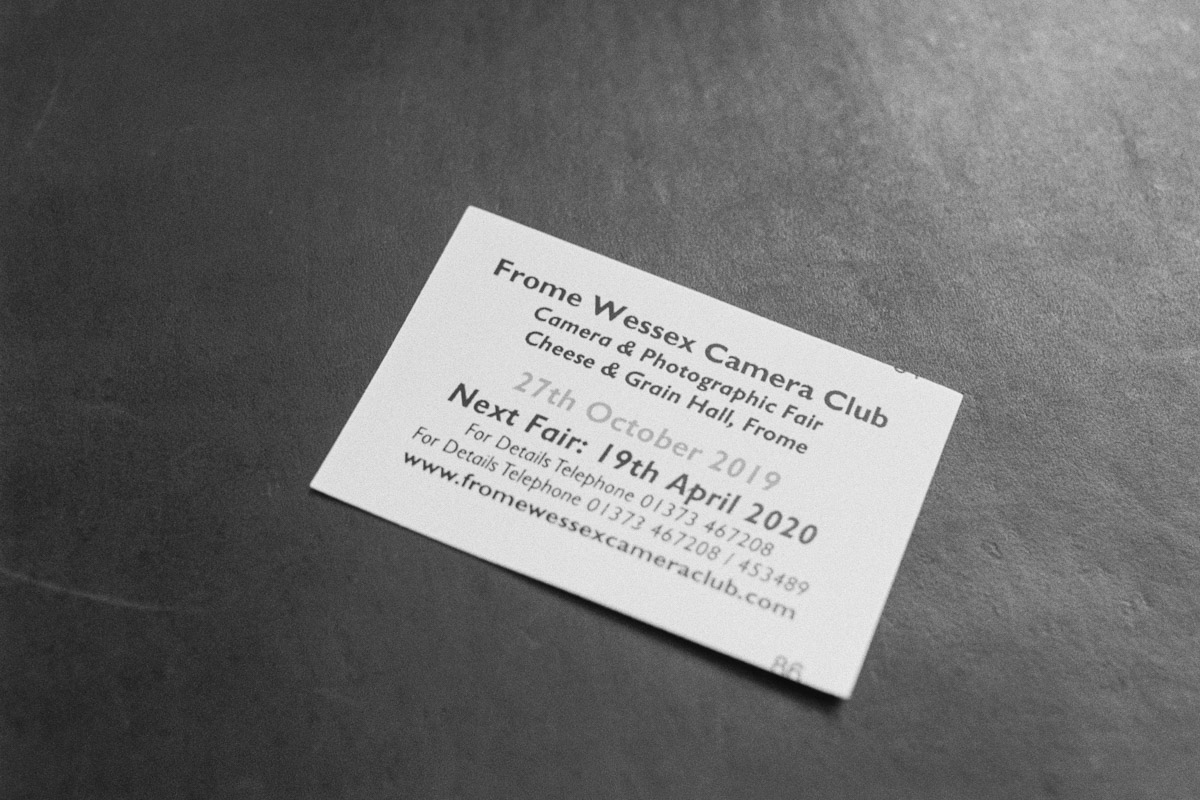 The hottest ticket in town (if you're into cameras). 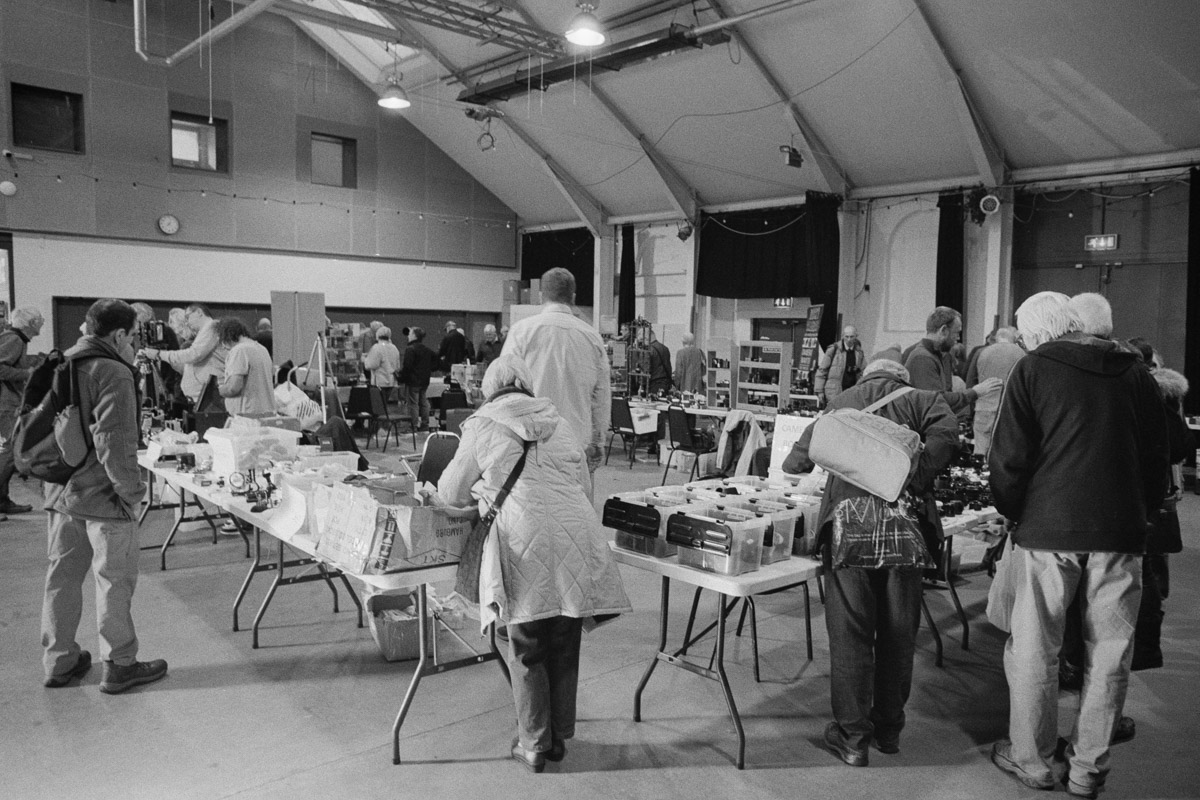 Punters hunt through tables of bargains. 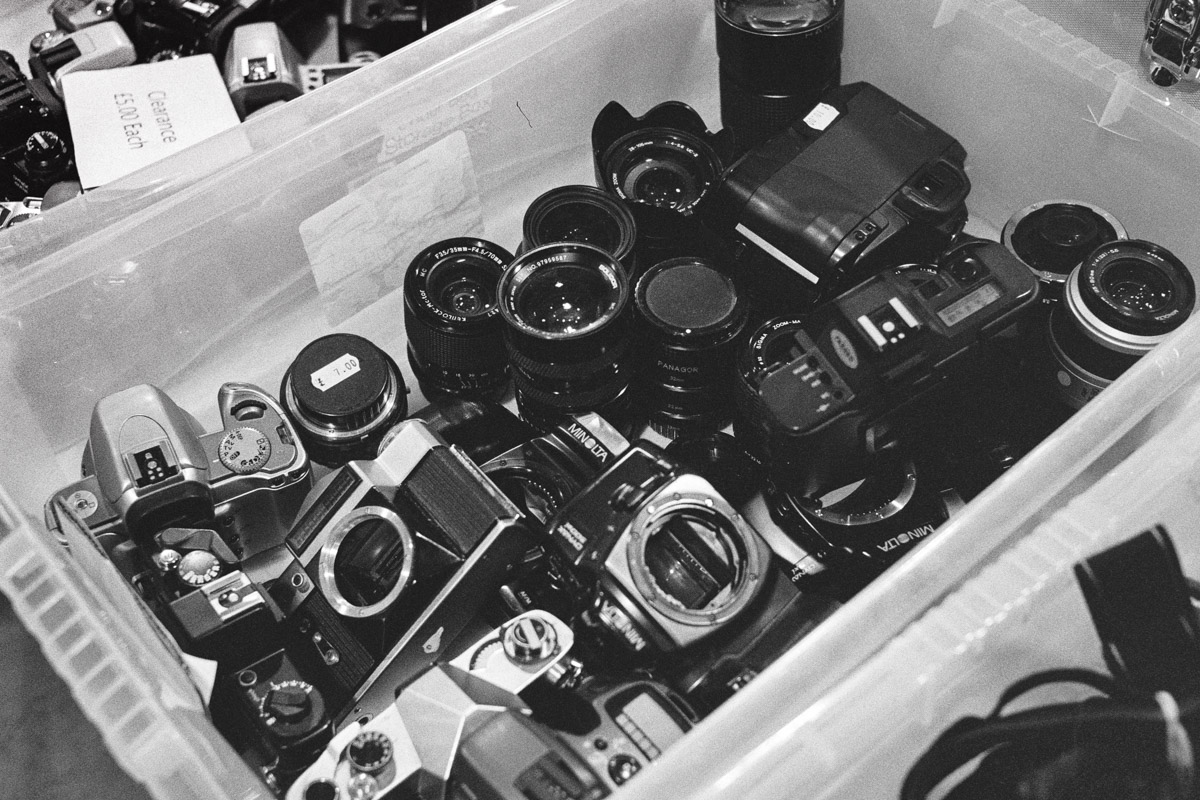 Somewhere in there is a bargain camera for someone starting out. 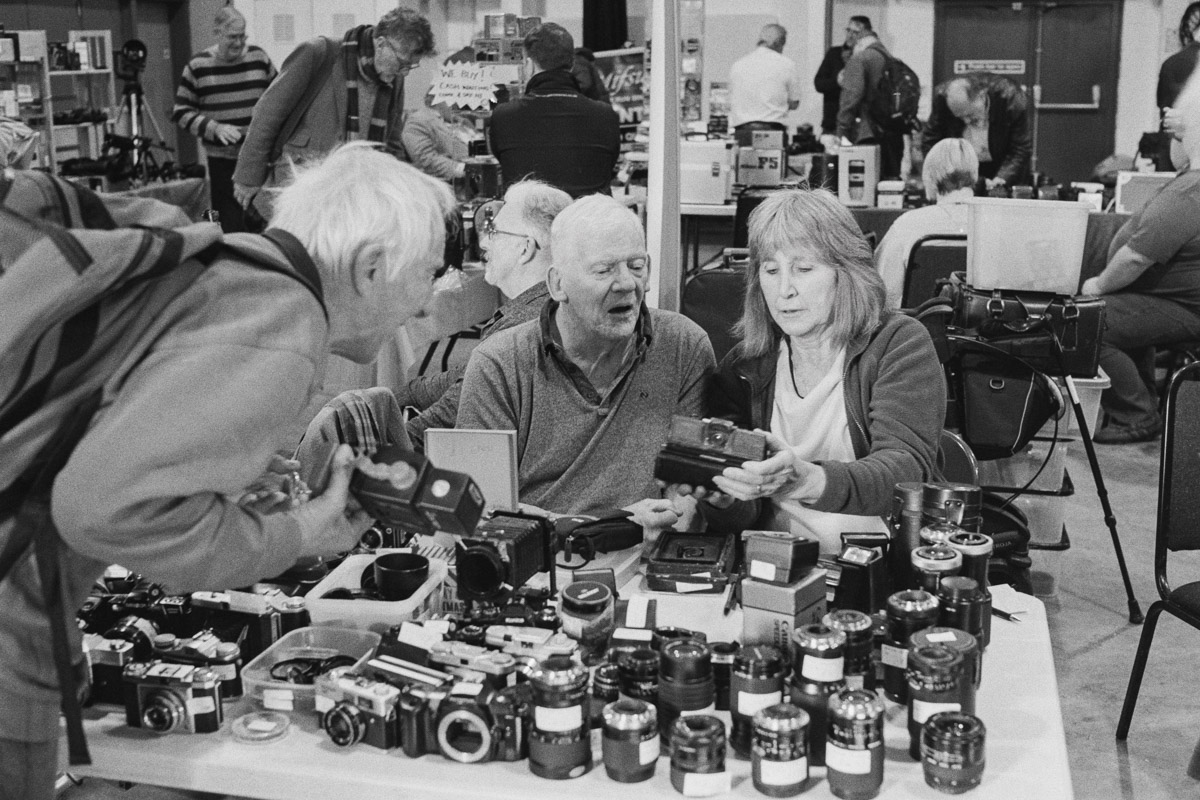 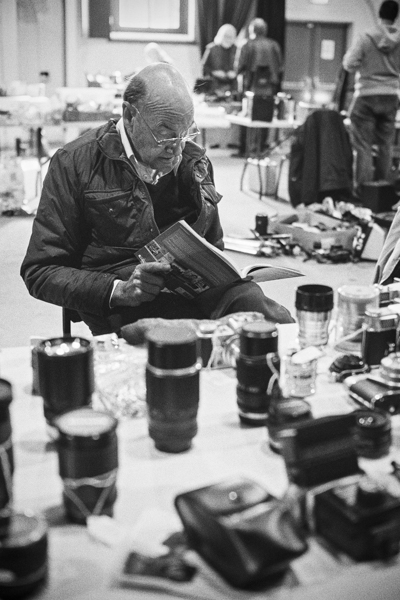 A little light reading during down-time. 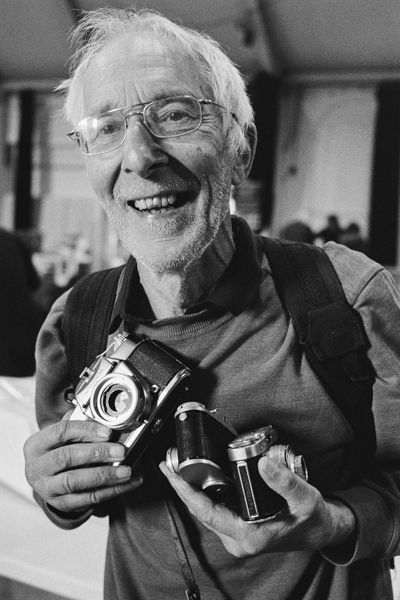 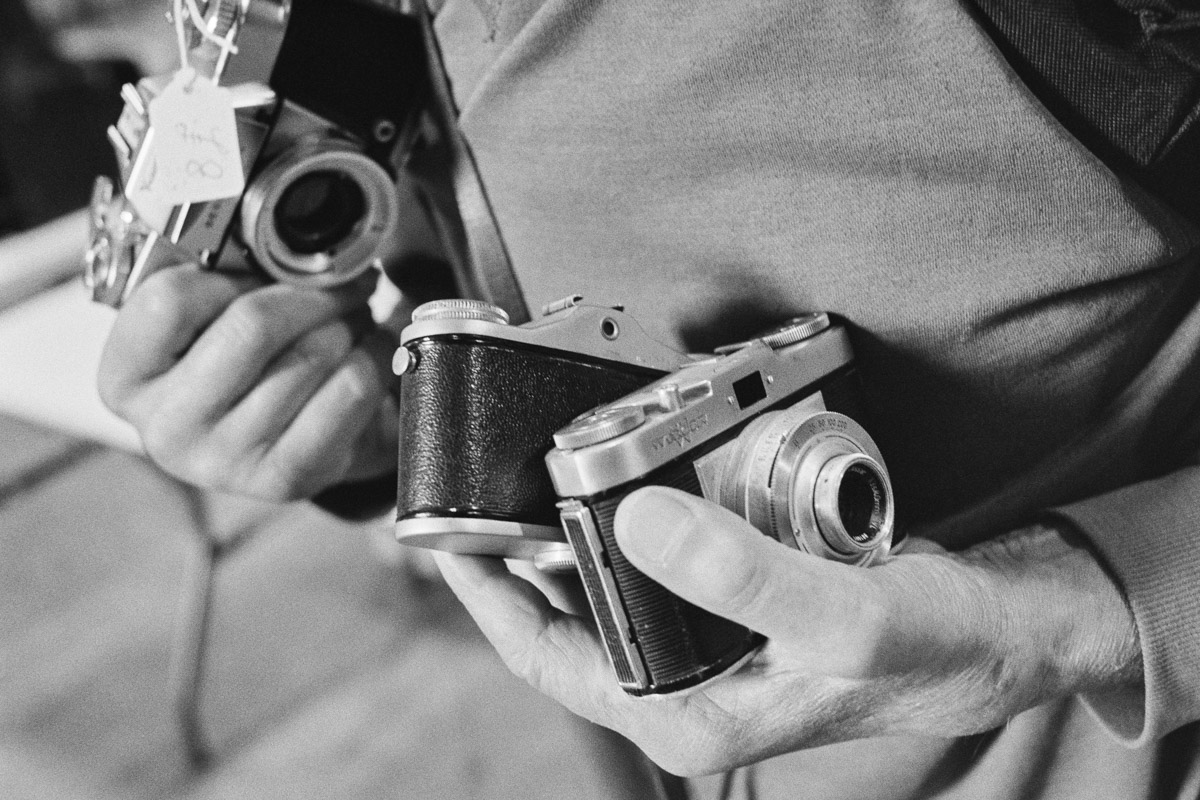 I couldn't resist a closeup of these gems. 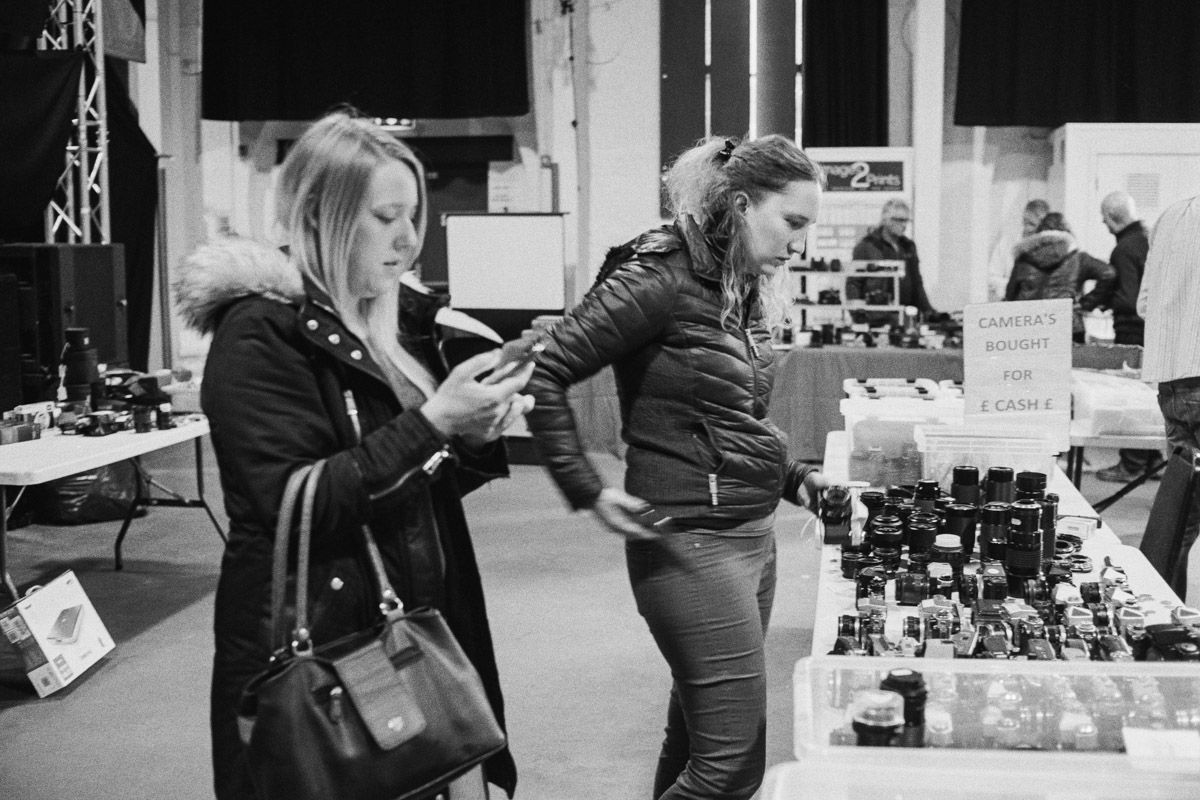 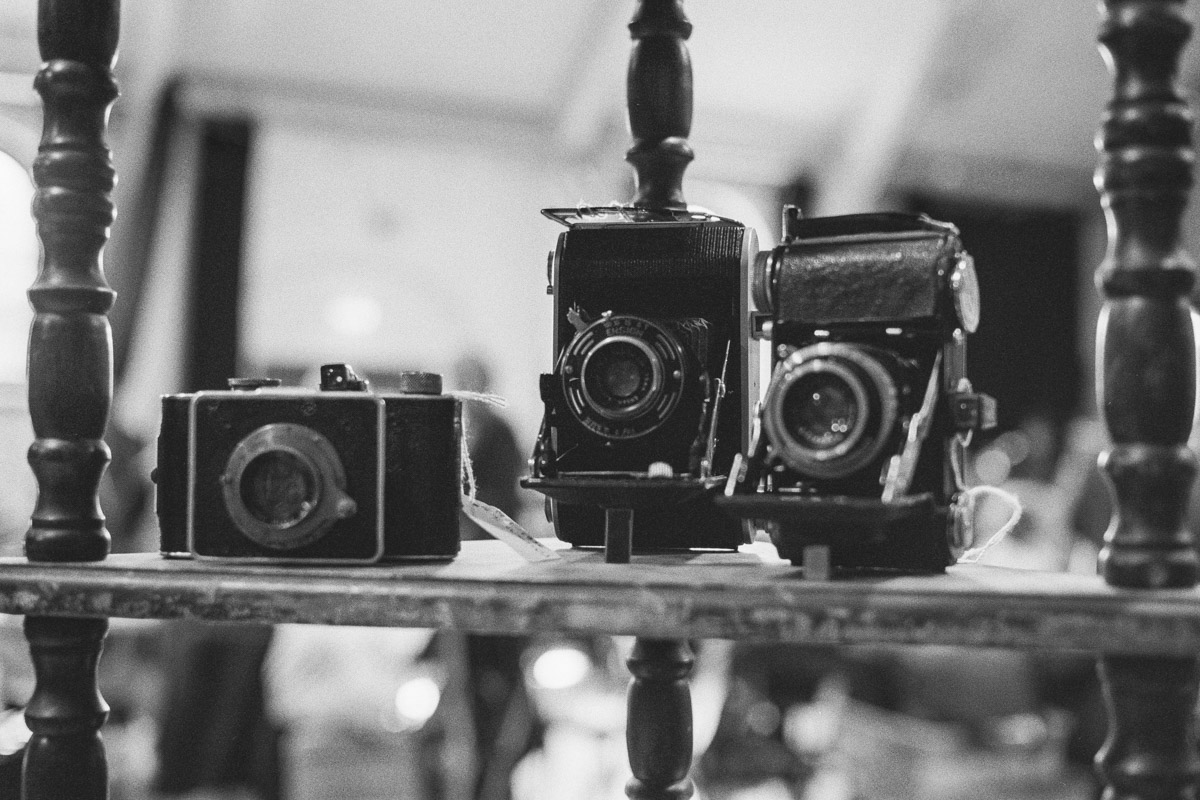 How much for the display stand? 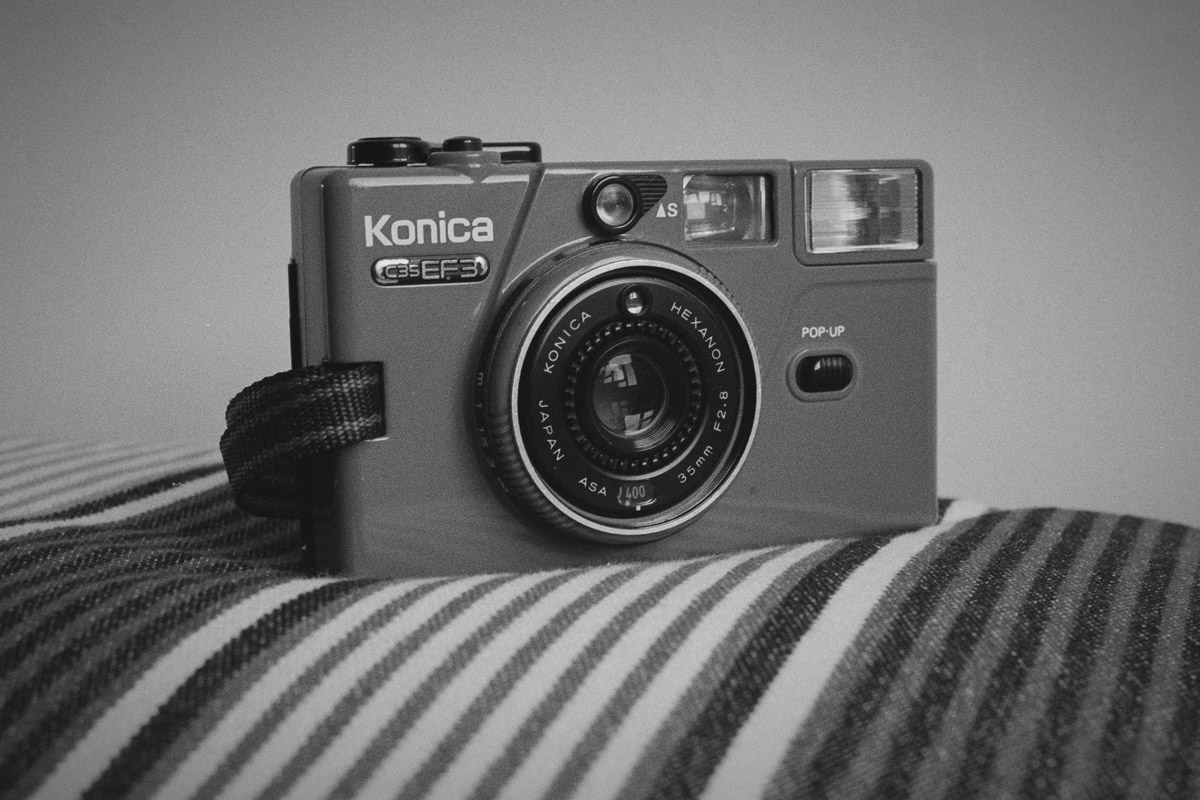 With my purchase I could either photograph fires or start them.

Of course you can go in with a wedge of cash and blow the lot on some very lovely gear – my friend did exactly that. In fact he picked up some genuine, if pricey, bargains alongside some very cheap non-pricey bargains, and the fair usually has something for any budget.

Even I picked up a fun little camera, thanks to my friend having loads of cash on him and me paying him back after. I know, I cheated.

My bargain was a red Konica C35 EF3 for £15, flash not working. It turned out that when the seller said the flash didn’t work, what he meant was that you could switch the flash on IF you wanted the camera to get fantastically hot/ you wanted the smell of burning electronics up your nose.

No problem though, I can use the camera without flash and it’ll allow me to play more in my ‘down time’. Or on a really cold day I can turn the flash on and warm my hands by the resulting electrical fire.

Now what I’ve been building up to very gingerly in this article is my impression that the fair was a lot quieter this time around than I’ve seen it in previous years. Fewer dealers, fewer visitors. I’m sure there used to be more of both and a lot more gear to tempt the canny bargain-hunter. It just felt a little hollowed-out.

Perhaps I got there too late in the morning for the real rush, but I got the impression it had been a little on the quiet side from the start.

In the past there were people selling historical prints, but none this time around. By way of compensation there was a table laid out with beautiful prints and cards for sale by contemporary photographers Roy Hunt and Martin Wade, who both work in traditional film (thumbs up from me), but again I got the impression they’d not been overwhelmed with sales that morning.

It would have been good to have seen more in the way of photo books on offer, or film and film processing equipment as this is enjoying such a resurgence amongst younger photographers. I did spot some film, but it was tucked out of site under a dealer’s table.

The one issue the fair does suffer is the almost exclusively older white male patronage. Yes, I fall into that category, but neither gender nor age balance would have been improved by my absence.

Another challenge the fair must be facing is that where film cameras used to take up a lot of table space, they’re becoming harder to source at a reasonable price. Some have reached collectible status and prices have gone through the roof. It’s also inevitable that as years pass, more of the old mechanical and electronic film cameras will simply die of old age.

The risk with the fair is that unless it attracts a younger and more diverse crowd, its dealers and visitors will also die of old age.

Perhaps a help stall where someone starting out could get free impartial advice about which kit to go for, and even guidance as to which dealer has what they need. More books, contemporary prints, an exhibition or perhaps a competition or other promotional events would help get people through the door.

For the fair to continue and thrive, Frome Wessex Camera Club will to have find ways of improving their reach. There needs to be better marketing to younger people, and better marketing over all since I was blissfully ignorant of the event until my friend called me. In fact as I exited the event via the cafe I bumped into a couple of friends who’d cycled in for breakfast. Even sitting in the room right next to the fair, they were oblivious to what was on in the main hall.

I’ve had a bit of a flurry of requests for work experience from Frome College students doing photography courses, so I assume the interest is there, but I didn’t see anyone of college age and I was there for a good couple of hours.

Photography is all about imagination, and this event definitely needs an injection of that to stop it becoming, like a broken old Zenith E camera, beyond worth saving. 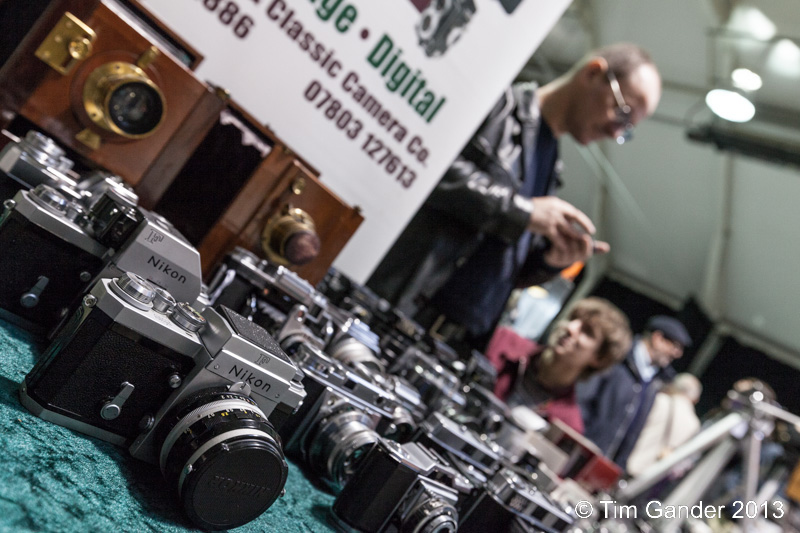 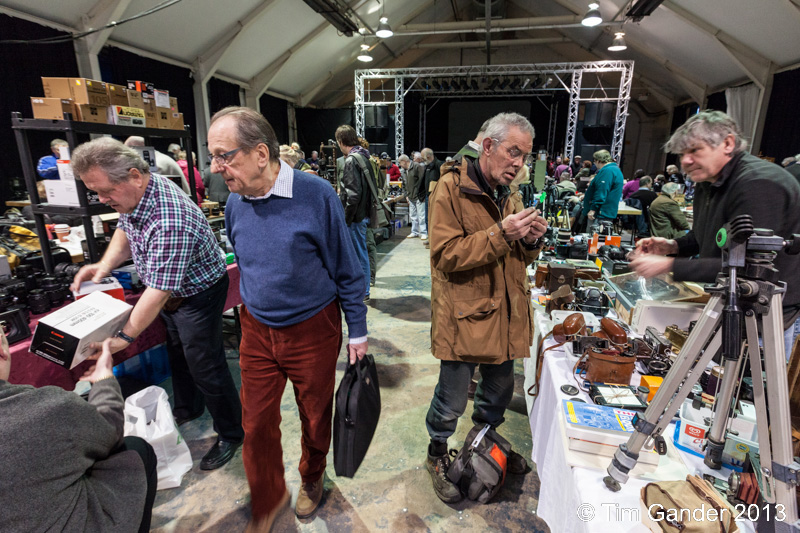 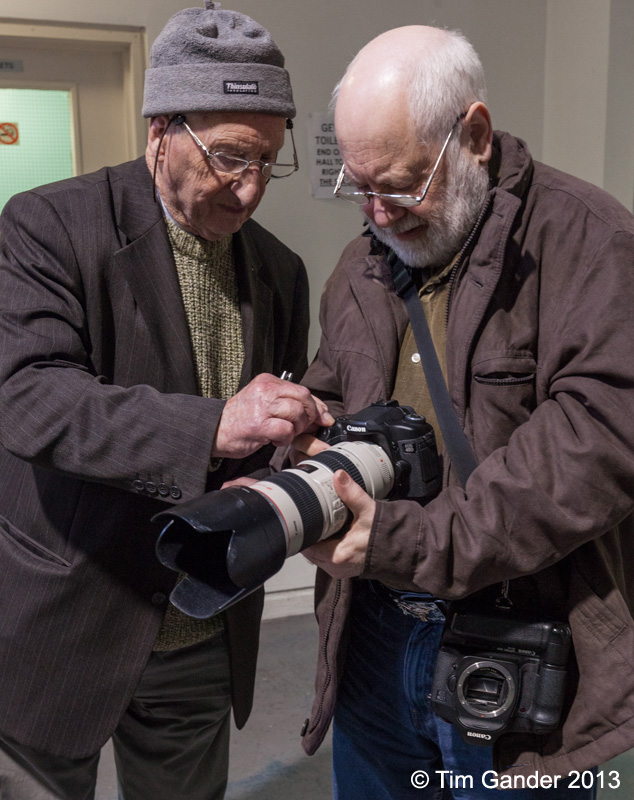 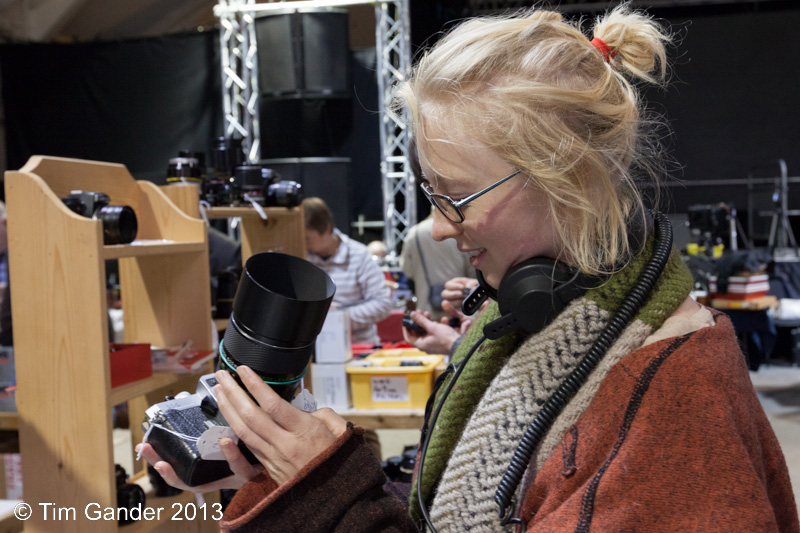