Never one to gloat, but…

It’s hard to fight back the tears as I write this, but I’ll do my best. What has got me reaching for the handkerchief is the news that Stuart Kuttner, former managing editor of News of the World, is to be charged with conspiring to intercept communications without lawful authority. I’m not going to go into masses of detail now. There’s plenty of background to this story on the web and in my previous posts here and here.

Suffice to say this story isn’t over yet and I’m sure Kuttner has the funds for a top-flight lawyer, but wouldn’t it be nice to see a bit of karma for once? If convicted, Kuttner could face a prison sentence and certainly if the charges are proved in court, the flagrancy of his behaviour would increase the chances of a custodial sentence.

Does this news give me any great pleasure? Schadenfreude maybe? Kuttner forced me out of working for the News of the World about 12 years ago because I asked to be paid what I was owed. I’d rather he’d been a decent human being when I was there than have it come to criminal charges for phone hacking (not sure what’s happening with the allegations of signing off expenses for payments to police officers), but given I can’t control other peoples’ behaviour I’ll accept that this is as close to karma as I’ll get.

The Screws terminally screwed up. 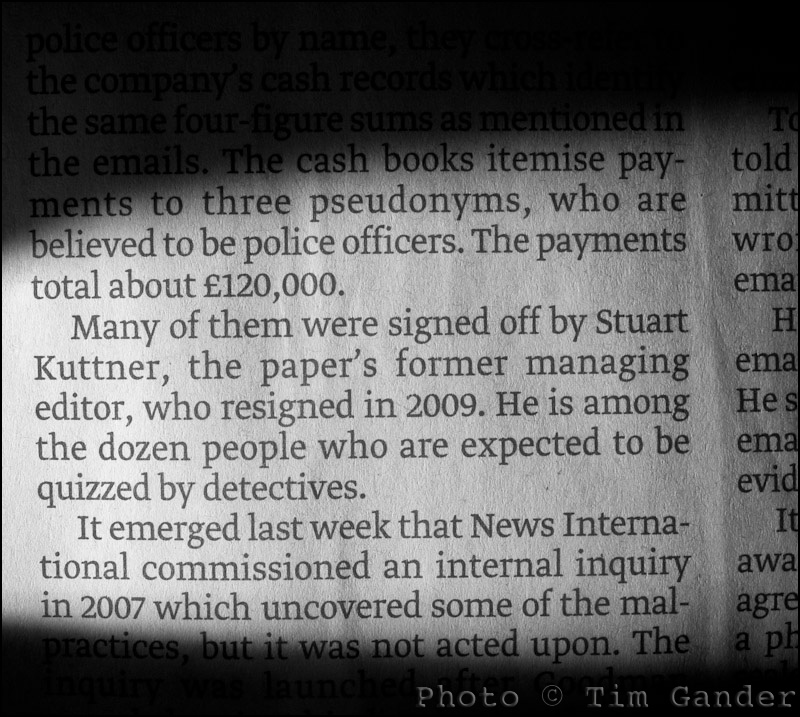 Kuttner has questions to answer

In my article The Screws Becomes the News I speculated that phone-hacking was more widely known about than News International were letting on, and that compensation payments to hacked victims were a way of trying to insulate executives above editor level from the burgeoning wave of controversy and official investigation.

Last week, I needn’t tell you, the fan was set to overdrive and the proverbial brown stuff made contact with such force that we could all smell the resulting mess, and The Screws is now no more.

Hacking the phones of victims (and their relatives) of murder, terrorism, military action and illicit payments to police officers, a Royal Protection Officer; the allegations have come so thick and fast that Murdoch has been caught uncharacteristically and spectacularly off-guard. It’s looking like his son can’t cope, his BSkyB ambitions have been put on hold and the share value of News Corp is under attack.

If Rupe thought he could rescue the main body of News International by amputating the sceptic arm that was the News of the World, it seems he’s going to have to lose more, or get a better surgeon involved.

The gangrene may yet spread wider as further allegations come to light, and we haven’t even seen the start of official investigations, reviews and legal proceedings.

What can we expect in the coming days, weeks and months? Well, a mixture the expected, unexpected and probably downright bizarre. Rebecca Brooks is seriously damaged. If Murdoch cuts her free, she’ll not find work easily. Her CV will do her no favours.

More seriously for her, for the former editor Andy Coulson and the managing editor at the height of the hacking years, Stuart Kuttner, there must be a very high risk of criminal implication.

I’ve asked before, and I’ll ask again: How is it possible that executives who were hell bent on keeping the expenses of their freelancers trimmed to the minimum didn’t know they were signing off huge payments for phone hacking and police bribes? It simply isn’t feasible and it wouldn’t be acceptable if investigations didn’t get right to the heart of who knew what and when, and didn’t bring the culprits to justice.

I for one will be watching with great interest as events unfold, but in the meantime and again as I said in my previous NotW article, I do have sympathy for the talented staff who have finally lost their jobs over this.

Leaving the scandals, enquiries and investigations to one side, it’s interesting to consider what this almighty mess actually means for the Political future.

Politicians (with the bruising inflicted by the MPs’ expenses scandal) will be keen to end the influence newspapers have on their views, actions, policies and likely political success. They will be happy to declare themselves free of and uninterested by the influence of the print media.

In parallel, newspaper publishers have witnessed the loosening of their influence from well before this scandal as the internet started to accelerate the decline in circulations and advertising revenues, and it is the internet which is starting to flex its political influence. We see this in David Cameron’s increasing coziness with the likes of Google. He tried to keep print press close by employing Andy Coulson, but that backfired spectacularly.

Will the internet be a better friend to the politician? I’m doubtful, but one thing is clear. Politicians thought the print media were powerful long after it was obvious to everyone else that readerships had declined to a point that only a tiny minority of people actually read newspapers. But at least politicians had a chance of “herding” information and controlling the message to some degree. They could see who was writing about them and they could cozy up to a limited number of political corespondents.

From here on, it’s all going to get a lot more complicated and harder to control. Tighter regulation might reign in Fleet Street, but the digital world is a completely different proposition.

UPDATE: No point updating. By the time I’ve written the update, someone else will have resigned, been arrested, extradited, a business deal will have collapsed, another scandal will have been unearthed and I simply can’t type fast enough to keep this current.