Get With The Union

A couple of years ago I mentioned Union magazine in a blog post about how I need to feed my creative soul with things like magazines, Huck being another good example.

Union was started by a small group of individuals including photographer James Cheadle who I first met way back in the early 1990s when he was a darkroom technician at The Bath Chronicle and I was a freelance photographer in the throes of training for my certificate in newspaper photography.

In the intervening years James and I have met on very occasional jobs, but we only kept vaguely in touch. But when I saw he’d launched a magazine, I had to take a look.

I’ve supported the magazine from the start and am the proud owner of all four copies so far published. If I’m not careful I’ll have to build a glass-fronted teak display case with internal illumination to store my burgeoning library, but for now the copies I have will reside in my MFI bedside cabinet. 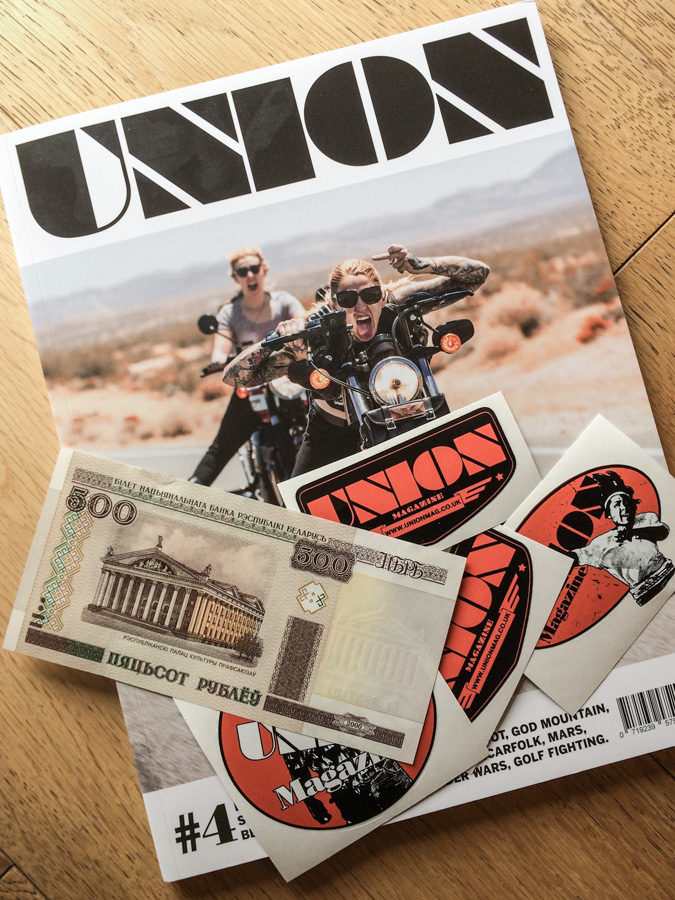 Stickers, cash and a stonking good read. What's not to love?

The magazine is a good read and very much photography led, touching on the quirkier corners of society; girl bikers, religious cult members, gang members and a few more bikers. James’ interest in motorbikes and those who ride them certainly shines through, and while I’m not a particular fan of bikes I really enjoy reading the stories and seeing the biker culture represented insightful, engaging photography.

Always a pleasure too is the added bonus of receiving some Union stickers and even occasionally some defunct, but weirdly fresh, foreign currency.

Union magazine won’t be to everyones’ tastes, and since its first edition some design and typology issues have needed to be worked out, but issue 4 is looking fantastic and I’m really looking forward to reading it. I wish James and the team the absolute best of luck with a magazine which deserves success in a market dominated by the big publishers churning out cookie-cutter, vanilla publications.

Up with the UNION!

in My News / Reviews 0 comments