From sperm to commercial photographer. An incredible journey!

Many a photographer will tell you they knew their calling right from the age they could hold a camera. Some will boast that they were checking out the possibilities of light and shade even from inside their mother’s womb. Well I can beat that; I was getting ready for the press photographer’s scrum even as I approached my mother’s egg.

Ok, I exaggerate a little there. The truth is, and to cut a soul-crushingly long story short, I’d known since leaving school that I wanted to take pictures for a living, but had no idea how to proceed until someone introduced me to the picture editor at The Bath Chronicle. 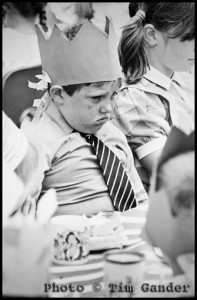 I may have been happiest at “The Chron”. Not all my subjects felt the same way.

From work experience at The Chron to trusted freelance happened pretty quickly, and hitting the FFW button again brings us to where I wanted to be – working for national titles, specifically and almost exclusively for the News of the World, where I spent the best part of two years shooting celebrity nonsense.

However, a fairly terminal disagreement with “The Screws” meant a very sudden exit from the stable of photographers there. Something to do with them owing me about £3,000 in unpaid expenses and them not wanting to pay, as I recall. Nothing important…

So there I was, having dedicated a couple of years of my career almost exclusively to them, to the exclusion of my previously regular clients, and not a lot on the diary. So I picked up my book and tear sheets and started to call in at the other news and magazine picture desks. Strangely enough though, a fistful of cuttings from The Screws doesn’t exactly open doors at The Sunday Times or The Guardian. And after the constant stress and under-payment of one national, my heart wasn’t really in it any more. I could see the industry was going down the pan, and decided to turn the break into an opportunity.

Which brings us neatly to where I am today. I’ve taken my press training and experience, adapted to commercial photography, and combined the two disciplines to give my clients something a bit unique. This isn’t a sales pitch though, so moving swiftly on…

Of course I’ve also had to work on my business skills and adjust to the fact that I won’t get a bollocking for doing everything right. I’ve had to break the instinct to shoot all my pictures from behind a bush in the car park (I’ve found that tends to unnerve some people). But I do enjoy being given some creative freedom, being asked for picture ideas and not having to pee into a bottle in the back of a surveillance van.

I do miss press work sometimes though. When I see a big story break, I might wish I was there to cover it, but apart from the occasional magazine commission, I don’t work directly for newspapers any more. Taking into account all the costs of being equipped to do the job and running a professional service, the fees offered by the press mean they’ll be drawing on an ever dwindling number of professionals who can still afford the cost of working for them. I’ve grown up and moved on to where I can be of most use, and still make a living.

This article is soon to be a film starring Jim Broadbent and Matt Damon. If Matt can fit into the sperm suit.