The Orphans are Back! 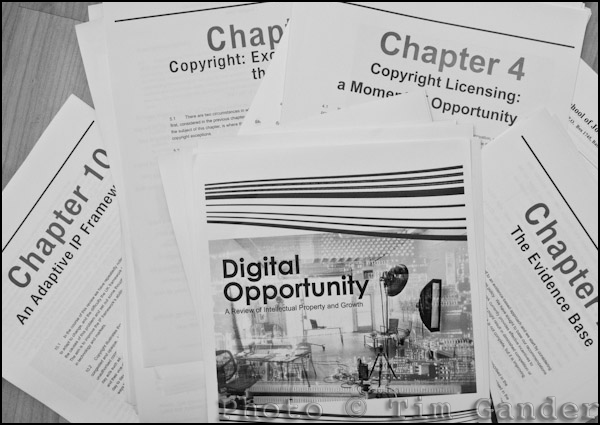 I’d hoped to comment much earlier on the government-commissioned independent Review of Intellectual Property and Growth, but the resulting document produced by Professor Hargreaves and his team has taken me far too long to wade through while still trying to get on with the business of being a photographer.

And herein lies a common problem with such reviews. Those who stand to lose the most are the ones with the least time to spare to influence and pour over the review’s conclusions.

Like may photographers, I simply don’t have time to wade through all 123 pages of the report. I submitted my views back in March, and they were duly noted and published on the Review site, but apart from a few passing references to photography, the review seems to have concerned itself more with music, film and TV rights when dealing with copyright in the creative industries.

So you’ll forgive me (probably thank me) if I don’t go into great detail here about what I think of the review, it’s implications for professional and amateur photographers. I think I may be review-weary, especially as many of the arguments raised and defeated in the Digital Economy Bill debate are predictably reappearing.

What is quite ironic though is that one of the main areas for the review to consider was that of Fair Use of copyright works.

“The founders of Google have said they could never have started their company in Britain. The service they provide depends on taking a snapshot of all the content on the internet at any one time and they feel our copyright system is not as friendly to this sort of innovation as it is in the United States. Over there, they have what are called “fair use” provisions, which some people believe gives companies more breathing space to create new products and services.”

But it would seem the one thing he picked out for special consideration appears to be the one thing the review recommends against, the truth being that although the USA does have Fair Use exceptions to copyright, this has done nothing to stem the tide of legal actions in copyright disputes.

Cameron was mis-guided to site Google as an example in any event, because unless I’m missing something, Google appears to function perfectly well in this country. In fact I suspect that had Google started in this country, it would have been when their service hit US digital territories that they would have run into trouble.

There’s a generous smattering of conditional terms in Cameron’s introduction, such as “feel”, “some people” and “believe”. In other words, Google had a hunch their startup stage would have been hampered in the UK, but they have no real evidence to support this view.

In essence I’ve not really scratched the surface of the review in this posting, but I’ll sum it up like this:

1 Orphan works is back – I hope someone sees the sense to keep contemporarily-created images separate from museum-held works. Not an easy distinction, except that any orphans then can ONLY be works which have been digitized from orphan originals held by museums, art galleries and other public bodies. And images cannot be called orphans just because the meta data has been stripped (as happens when images are submitted to Facebook, BBC etc).

2 No apparent extra protections for photographers works – no sanctions against the stripping of IPTC info, or the willful creation of orphan works.

3 Worrying references to “flexible legislation” which potentially means copyright law can be changed without recourse to Parliament.

At this stage I can’t say I’m getting overly anxious. The report will be poured over and picked apart. For any of it to become legislation it will have to be drafted by lawyers and debated in Parliament, and in the meantime it seems rulings are coming from the EU which point to better protections for creators, and all this needs to be standardized across the EU, including the UK.

One final irony is that while the report seems to be concerned almost exclusively with music, TV, films and games, the cover features a photo of what appears to be a photographer’s studio. It would be nice if they’d bothered to listen to photographers then.