Blast from the Past – Frome Pine Range Fire

Sometimes I like to pull something from my archive and share it with you, so here’s a photo from February 1991 showing the Pine Range furniture factory in Frome being attended by fire crews as it’s gutted by fire. I apologise for the quality of the reproduction here, it’s an old newspaper cutting and I no longer have access to the original negative – a common occurrence of my very early work which is held by The Bath Chronicle (more likely the negatives no longer exist). 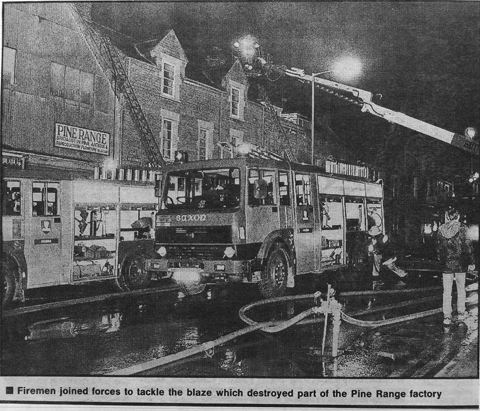 I vaguely recall the circumstances surrounding this call-out. I was a freelance at “The Chron” at the time and I was probably working late, printing the day’s shoots ready for the next day’s paper, when a reporter came into the photography department to see if a photographer might be around to attend a breaking story. Luckily for them, I was.

The story had come through of a big fire in Frome, so we headed out in my car (to be pedantic, probably my then-girlfriend’s car) to see what was up. I know it was late at night, might even have been around midnight, when we got there to find a few fire crews in attendance at the building which was billowing smoke.

It was such a bitterly cold night that the run-off water from the fire hoses was freezing to the road, and I recall struggling to walk up the incline to the scene because of all the ice under foot.

There wasn’t a huge amount to photograph, I just had to make sure I got the building and fire engines to fill the frame. After taking a few different angles, I was pretty much finished. There wasn’t much light about, and I recall using my large hammerhead Metz flashgun to illuminate the entire scene.

It was hardly a moment for great art, but I would have headed back to the Chronicle offices straight after to process my film and make some prints so the picture desk could choose one for the paper the next morning. I probably rolled into bed in the early hours and would have been back on duty about half eight the next day.

One small coincidence of this job is that from where I currently live my living room window overlooks the site of the Pine Range building, which was subsequently demolished and is now a block of flats. Hardly Circle of Life stuff, but curious all the same.