Last week I was setting up to photograph an industry awards event in Bristol which I knew would include some group photos as well as individual presentations.

During my preparations I took this photo of a row of chairs to check my lights and their outputs so that when it came to doing the group photos, everything would be pre-set without further setting up. 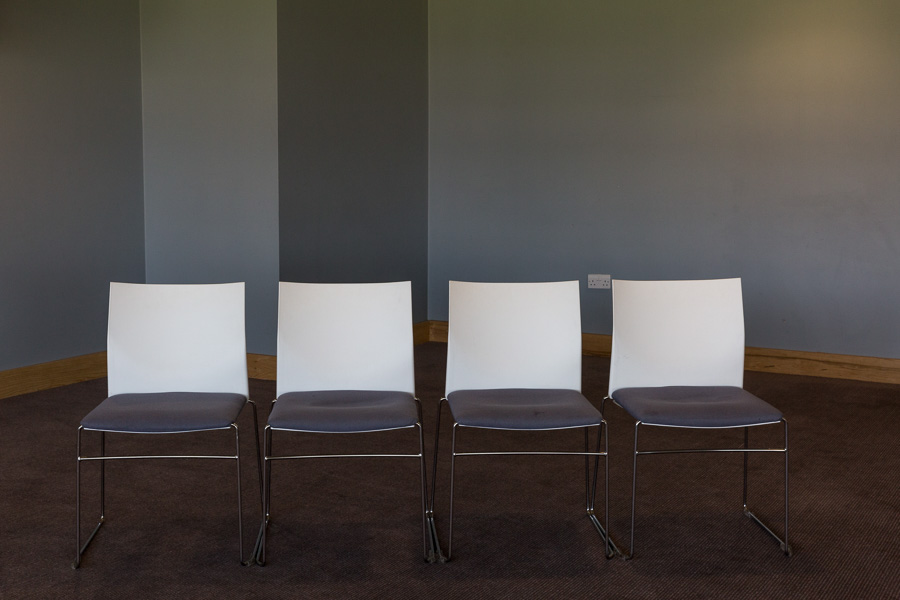 Consciousness of Dolphins #5 by Tim Gander

It wasn’t until I got back to base and started editing the images that the photo sort of jumped out at me. It has a quiet, expectant air. It is clean, but imperfect (stains on the seats, the 13 amp socket on the wall). I’m not much good at artistic analysis so I’ll resist too much hyperbole.

I posted it as a bit of a joke on a photographers’ Facebook forum and was pleasantly surprised by how the other photographers saw and participated in the joke. I titled it “Consciousness of Dolphins #5.”

Yet every time I look at it, something about it stirs me. The geometry of the wall behind and the way one edge exactly intersects with the chair back; the simple colour palette (here I go again, cod art terms I really should resist), and even the way the chairs anticipate the use to which they are about to be put. I can’t help feeling I’ve created something which might, had I been born with a triple-barrelled name or tutored in a Zurich art college, have been considered art.

But no. My belief is that art isn’t random. The artist must know what they are trying to achieve before they create a piece and that the art is what happens between the idea forming in the artist’s mind and the finished article coming into existence. You can’t screw up a piece of tin foil, mount it on a mahogany plinth and then decide what the message is. Likewise I can’t take a test shot with the purpose of checking my settings, then decide I’ve created art.

Still, I will say this: without being pretty, it is an engaging photograph. While I could say that’s good enough for me, what’s even better is that when the groups turned up, my settings were correct. Insofar as the photo has a purpose, that was it and that really is good enough for me.