Which would you like first; the good news, or the bad?

I’ll give you the good news first. This article is shorter than usual. The bad is, it’s a bit of a rant.

I’d love to be sitting here writing about the amazingly high standards in photojournalism as a result of newspapers fighting to retain readership in the face of competition from the web.

Instead, I’m looking, open-mouthed, at the depressingly low standards to which local newspapers at least (nationals may follow suit) have sunk. In short, I’m looking at a photo which is of such a poor standard that it looks like it isn’t so much a photo, as a children’s mosaic made from the leftover bits of LEGO left over after all the fun stuff has been built. 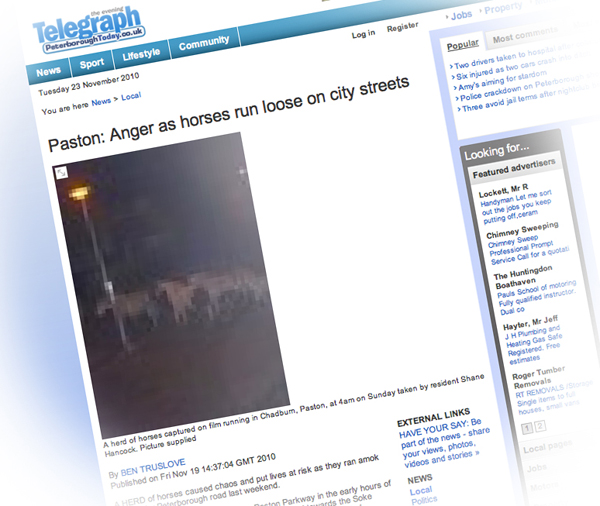 Honestly, that's as good as the photo gets.

The picture is meant to show horses running wild on the streets of Peterborough (see original article here). It’s a reader’s snap, but as you can see from the quality of the photo, it could be panto horses on a dimly lit stage. It could be a tapestry. What it is, is a travesty.

Have picture editors become so enamored of new technology that they can’t see when a photo is utterly unusable? Or have newspapers done such a thorough job of destroying the old training and career structures that there is no one left to say “that’s crap, let’s get our own shot from the late-shift staffer/next available freelance”? Or have budgets been cut to the point that any smudge, no matter how poor, will do provided it’s free of any cost to the editorial department? Do newspaper editorial departments now have such contempt for their readers (and advertisers) that frankly, any old s**t will do so long as a thicker wedge can be driven between the ad revenue and editorial costs? 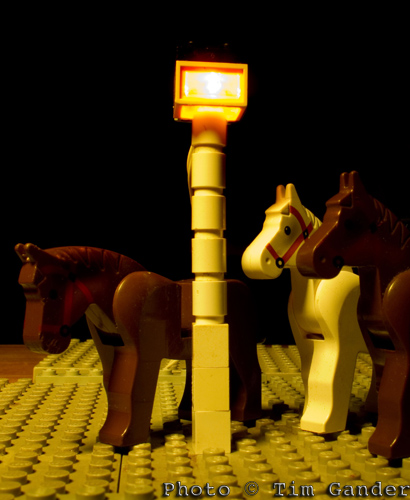 Perhaps LEGO representations of news events are the way ahead.

Normally I hate ranty blog articles, and while I do my share of moaning I tend to avoid the full-blown slagging off that is the stock-in-trade of other bloggers, but I have to say this isn’t the first time I’ve seen this level of citizen journalism foisted on local newspaper readers. There must be many more examples I never see, but The Portsmouth News also ran a pointlessly low-quality photo when a local landmark caught fire. Their only saving grace was that there was something to photograph the next morning.

I hope the Pereborough example is the worst we’ll ever see, but I won’t hold my breath.

If you’ve seen something as bad (or worse!) in your local paper, feel free to comment and leave a link. We could start a competition. Not so much “The worst photo in a paper” award, as “can you make out what this is meant to be?” kind of competition.

UPDATE: There is now a camera which is perfectly designed for exactly this kind of scenario: http://bit.ly/h8yDBu Remember though, it’s not a toy!