“PRIX is a photography lifestyle magazine for men. If you love to snap photos, chances are you’re into cars, naked women and guns.”

Ok, that’s not a real magazine, but here’s an introduction to a magazine which does exist. Or should that be ‘does sexist’? you decide. At the very least it strikes me as deeply patronizing, but here goes the intro from editor Jeanine Moutenot:

“PIX is a photography lifestyle magazine for women. If you love to snap photos, chances are you’re pretty creative and artsy about the rest of your world too. It’s important to you that your business is modern and cool, you’ve always got an eye out for hip clothing and accessories, and looking professional and shooting well are top priorities. If this sounds like you, PIX is here to help! In each issue you’ll find tips, ideas, products and trend reports for women in photography.” Shooting well? Whatever that means. 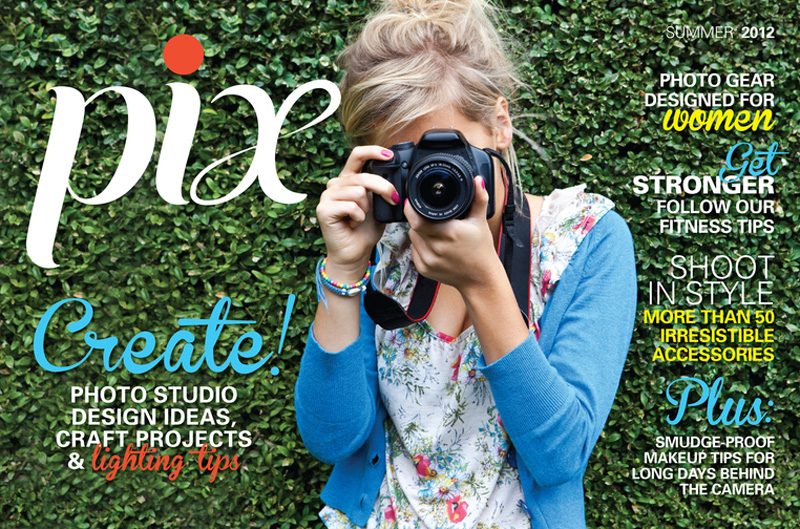 Fluffy and patronising? Am I the best judge?

The cover to the first edition features a photo of a young woman holding a camera awkwardly, Canon logo ham-fistedly edited out, cheap kit lens on, but at least her hair, nails and dress are pretty. That’s the main thing, right?

Never mind the intro and cover shot, we know there are some incredible photographers out there and many of them happen to be women who would give highly insightful interviews. So what does pix offer? “Photo gear designed for women,” “irresistible accessories,” and “smudge-proof makeup tips for long days behind the camera.”

Indeed, in the pages of PIX you’ll get advice on where to buy a striped skirt to go with your funky striped Lomo camera. Or perhaps you need some Summer pumps so your feet can stay “covered, comfortable and cute while you’re on photo shoots.” Cute?! The general tone of the magazine seems to be aimed at women more interested in cameras as accessories than tools of a trade.

There are maybe 12 pages of articles featuring working photographers buried within the 63 pages of puff, but references to their motivations, challenges, styles or paths to success are fleeting. Before you know it, you’re back to editorial featuring pretty things to buy.

Maybe my being a man precludes me from passing judgement on a photography magazine aimed at women. Perhaps I’m missing the point and female photographers will relish the chance to read about flowery camera straps or an eyeliner that doesn’t smudge onto the viewfinder.

My gut feeling though is that PIX is incredibly patronizing, is aimed at aspiring photographers who are more interested in pretty things than the hard-nosed facts of photography and would have worked better if it had been aimed more at women simply by virtue of not featuring ads for glamour shoot workshops and men talking about the size of their kit.

PIX is really saying that if you’re a photographer and a woman, how you dress and the colour of your camera bag is at least as important as your ability and vision. In an industry with something of a male-dominated culture, is PIX redressing the balance or reinforcing stereotypes? I’d love to hear the views of photographers with fallopian tubes.

*The original quote “F/8 and be there” is attributed to New York photojournalist Arthur “Weegee” Fellig whenever he was asked how he got such striking images of news events during his career in the 1930s and 40s. Look him up, interesting guy. I don’t know if he ever worried about whether his camera matched his handbag.