Back to Black (and white)

For the past 16 years I’ve shot exclusively digital images for my clients which is brilliant for client work.

Deadlines have reached a stage where pictures are sometimes needed for social media even before an event has finished, and even for more polished work the turnaround required often needs to be pretty rapid. It’s also fair to say that on a purely technical level, digital has matched or exceeded that which was ever possible with film.

And of course I can do so much more with digital than I ever could with film, but whatever my medium I work hard to keep things “honest”. I don’t use filters or add grain to my digital images. My style is in the lighting, composition and final presentation of my work. Anything else risks dishonesty in my view, and even when I’ve shot digital and converted to black and white, it’s not the same as shooting a black and white original.

Ah, but film. I spent the first 13 years of my career shooting film; the first couple of years shooting only black and white. In recent years I’ve had a real itch to get back to film one way or another. I doubt I will ever have another client request that I shoot film, though I’d be delighted if the opportunity arose, so it has to be a self-motivated project.

Finally, a couple of weeks ago I could take it no more. I started to research what I needed. I still had my old film processing tanks, measures, thermometer and bits and pieces, so just needed film and chemicals to get started again.

To be fair, it had been so long that I had to remind myself of exactly what was required – vague memories of Ilford ID-11, stop bath, fixer were all very well, but I needed to refresh my memory of the specifics. As an initial competency test I found an out-of-date roll of colour film that had been languishing in the back of my fridge which I sacrificed to practicing loading film onto a spool in the dark bag. It all came back like I’d never stopped, so that was a good start.

Of course film is no good without a camera. I still have my Canon EOS 1N which must be 20 years old, but works with all my current lenses so I dusted that off, popped a new battery in and it still works perfectly. I confess I spent a while lusting over old Nikon and Leica mechanical SLR cameras on eBay, but collectors have turned these into objects of fetish obsession and the prices are ridiculous for anything which hasn’t been dropped in salt water or run over by a bus. 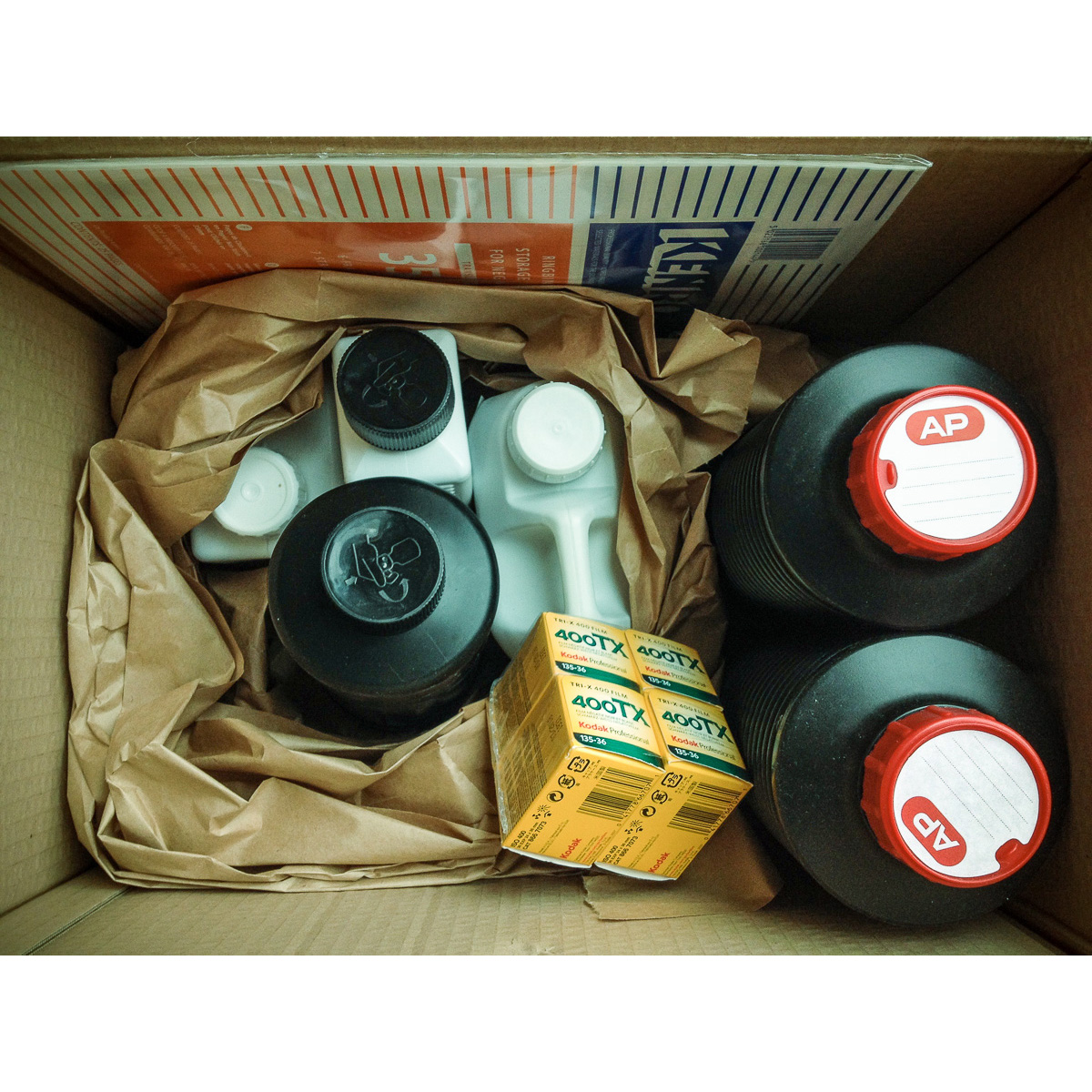 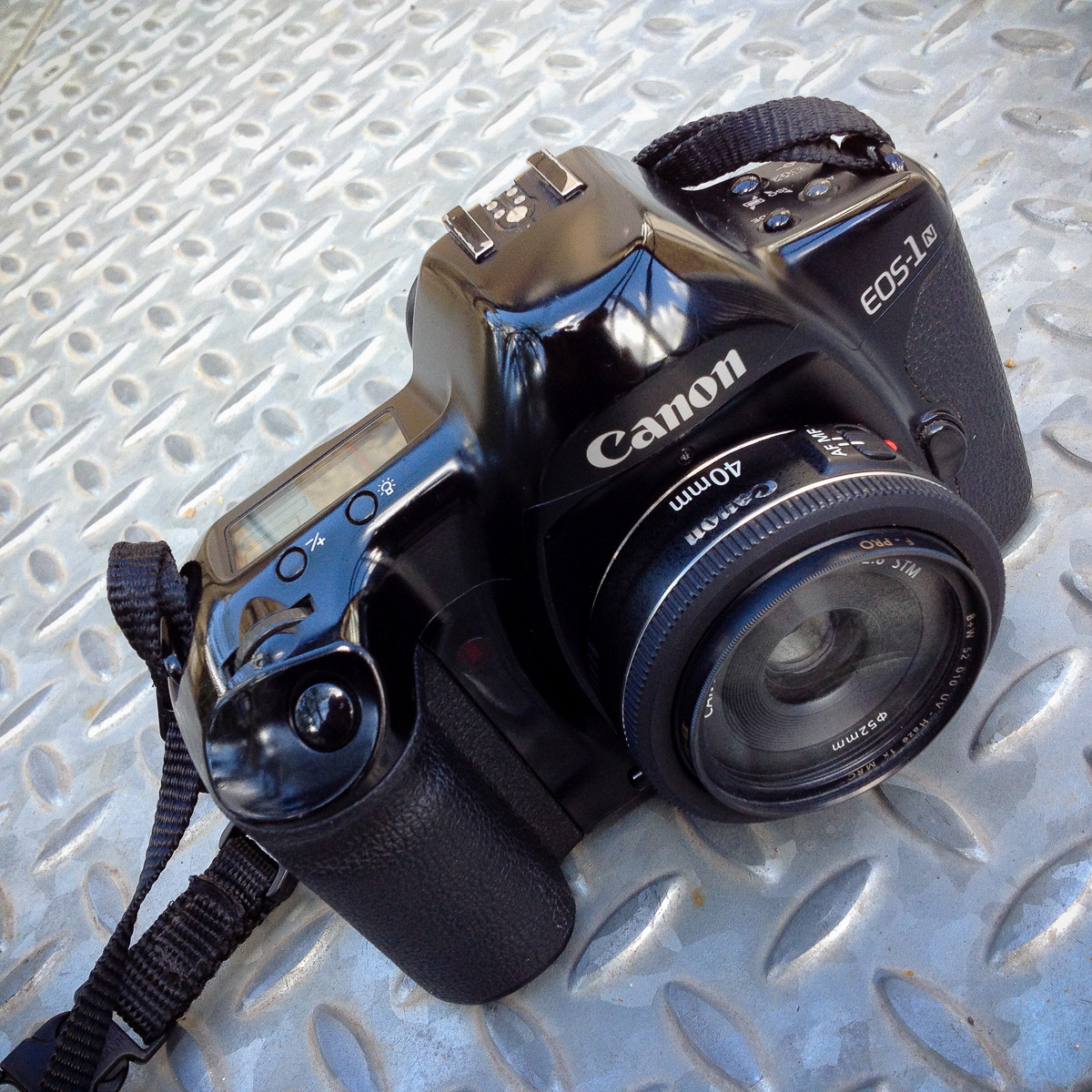 The EOS 1N isn’t a “refined” camera, but it’s solid and dependable and I could spend £450.00 on an old, mechanical Nikon (not including a lens) or replace mine (if it ever dies) for about £90.00 because it doesn’t look cool and retro enough for collectors to lust after it.

Now this is the point at which I’m going to tease you to death because I have already shot and processed my first two rolls of Kodak Tri-X film, but they’re not yet digitised (oh the irony) for display here. Looking at them on my old Cabin light panel they look pretty damn lovely. Film really does have something digital lacks; the difference is greater than that between vinyl and mp3s in the music world and it’s just a shame that short of mounting an exhibition there’s no getting away from digital if I want anyone to see the photos. I guess I’ll just have to mount an exhibition then.

Seriously though, in an ideal world I would get myself into a darkroom with a Durst enlarger with a Schneider Kreuznach lens and make beautiful prints on fibre-based paper, but if I can manage that ever at all it’s unlikely to be in the next few weeks. In the meantime I’m working out a system for achieving the best possible digital versions of the negatives.

When that’s done, I’ll definitely update you with images here. I honestly can’t wait. It’ll be interesting to see if the conversion to digital retains any of the character of the film. I do hope so!