Between running the Found Notes project, converting the bunker into an office, client work and a yet-to-be-announced exciting piece of news (watch this space!), I’ve also been trying to get out and about with film cameras to make new photo-documentary work.

That’s not easy when I seem to be in a phase of casting about trying to work out exactly what it is I feel I need to document, but while I work through that question it’s important that I don’t let that side of my practice grind to a complete halt. Apart from anything else, just getting out and looking and shooting pictures opens up ideas to possible new series, even if the pictures I take don’t present obvious answers right now.

One example is from yesterday when I got a few minutes to pop along the road to take pictures of local climate protestor Grace Maddrell. Her specific campaign is to raise awareness of the forest fires destroying rain forest in The Congo.

I’d seen Grace over the last couple of weeks, but yesterday was my first opportunity to make a few images. We started with a chat so I could get more background to her campaign and motivation, then it was a mix of posed and un-posed pictures to see what worked. 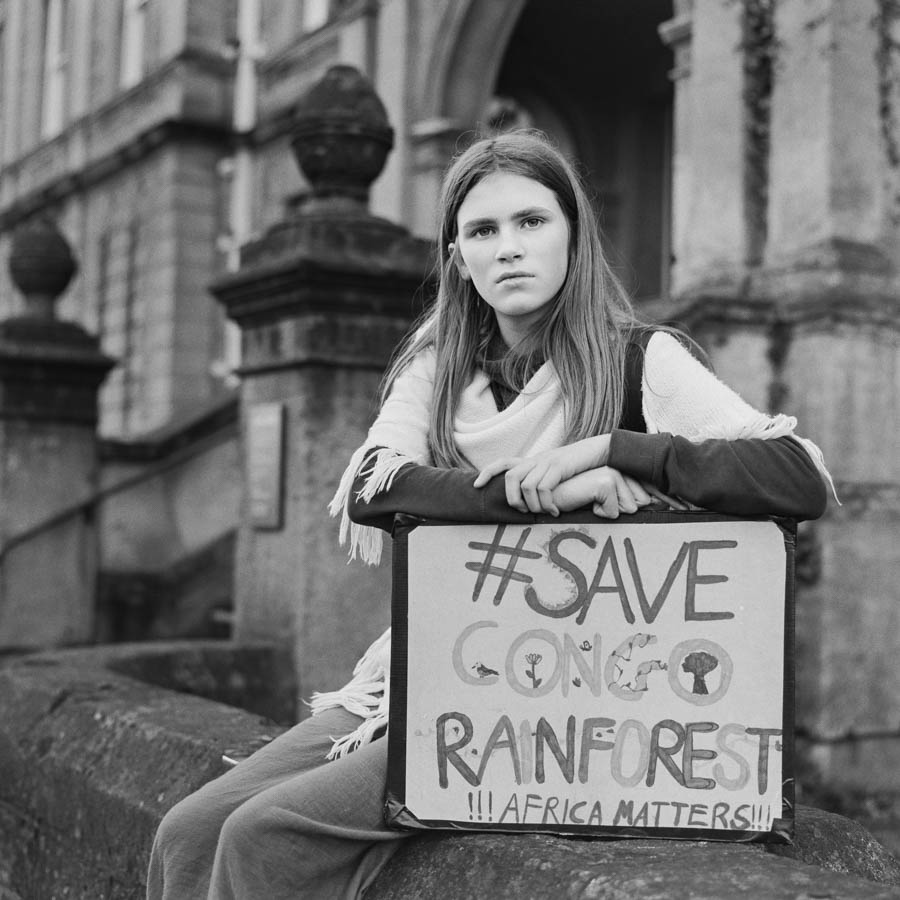 The image here is probably my favourite, though ultimately it’s just a fairly simple posed portrait. It’s possible I’ll re-visit Grace for more photos – it would be interesting to document her protest as it continues in different weathers and as the Winter really sets in. That may sound a little heartless on paper, but I want to show her dedication and she is very serious about this cause.

Grace spends her time protesting in her home town of Frome as well as Bath and Bristol and campaigns alongside the Extinction Rebellion and FridaysForFuture movements, but by her own admission her ability to travel is limited by her lack of funds. But at least she’s doing what she can.

If you’d like to follow Grace’s story, you can find her on Twitter as @ElmGrace. Go give her some support and if you see her, give her a wave and a smile, she’d appreciate that. Even better, join her on her protest.

In the meantime, I’ll continue to do what I can to document her campaign locally. It could become the unexpected next series.