When the chips are down, measure them. 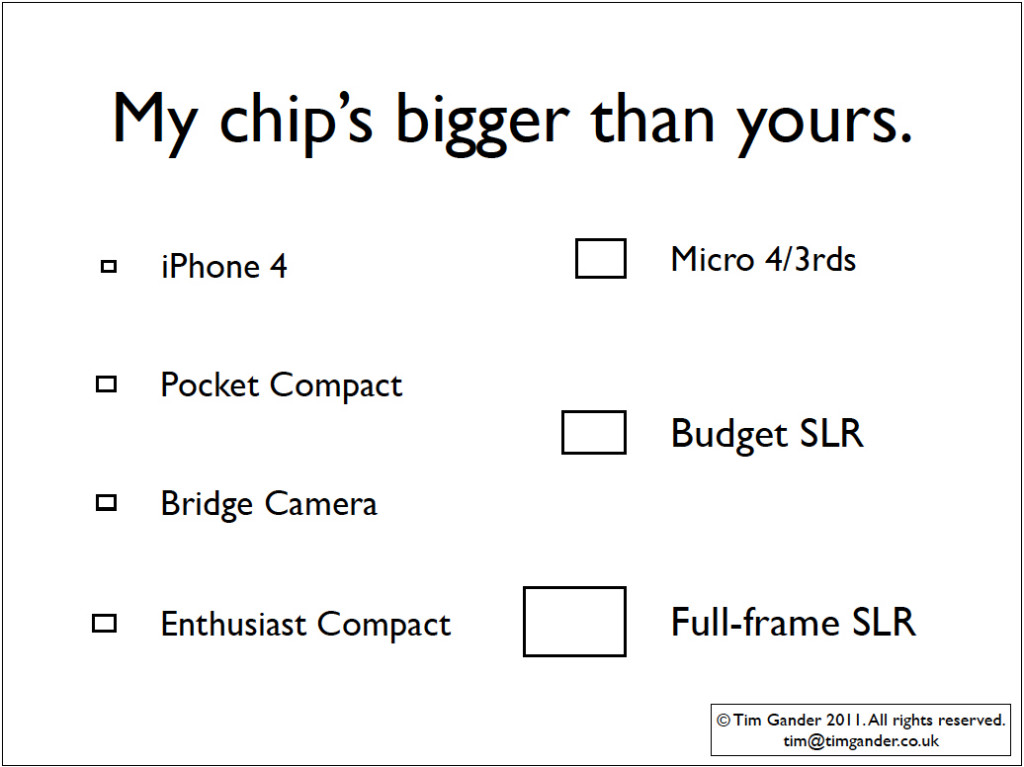 A bit of a frivolous posting this, but I was putting a presentation together based around the camera systems that are available, the pros and cons of various options, and what some of the technical jargon means (geek speak, if you like).

As an exercise to demonstrate difference at the heart of various cameras, I made a chart comparing the imaging chip sizes of various types of camera. The boxes you see in the graphic are to scale relative to each other, so don’t go measuring them with a ruler and then complain that they’re not the right sizes. I make no claims to absolute accuracy, but they give some idea of the difference between (say) the iPhone 4 chip and the chip in the Canon 5D MKII (the full-frame example).

The chart also points up that although micro 4/3rds (MFT) camera manufacturers like to claim that you can now take pictures like a pro with their cute, retro-styled, interchangeable lens cameras (my measurement is based on the Olympus Pen), the chip size is still some way off the full-frame DSLR and remains smaller than the chip found in the average budget DSLR. And that same DSLR chip is found in more expensive SLRs too, like the Canon 7D.

It’s probably testament to quality of the chip found in budget DSLRs, aka APS-C size, that it is good enough to go into cameras like the Canon 7D which costs around £1,130. Personally I’ve been a little underwhelmed by the test images I’ve seen from the MFT cameras, and with the body and basic lens costing well over £700 it makes you wonder if you’re not paying as much for the retro cuteness as for the camera itself.

Panasonic also make MFT cameras without all the chic charms of the Olympus Pen, and their equivalent to the Pen, the GF2, is around £460. That’s quite a saving for eschewing the chic, and it’s not an ugly camera either.

But what the exercise drew my attention to, in looking at cameras like the Pen, was that photographers risk being lured not by what a camera is capable of, but how cool it looks around your neck. You only have to hear the starry-eyed droolings of photographers who lust after the Fuji X-100 to know what I mean. I should know; I’d like to try one too!

To me though, a camera is a tool which is necessary in the process of taking pictures. It’s obviously at the heart of what I do, but provided I can hold it properly and all the buttons are in sensible places, I’m not too concerned about what it looks like. The world would be a duller place without nicely designed objects, but I do think camera manufacturers risk luring people more with cute and clever design than with basic photographic quality.