For this week I thought I’d dig out something from the archive; a portrait photo taken with press use in mind to help illustrate the difference between this and a straight headshot.

In fact the photo here was commissioned by the News of the World for a business page article back in 2001. Nothing dodgy (for once), just a straight-up business story about Fulton Umbrellas‘ founder Arnold Fulton. 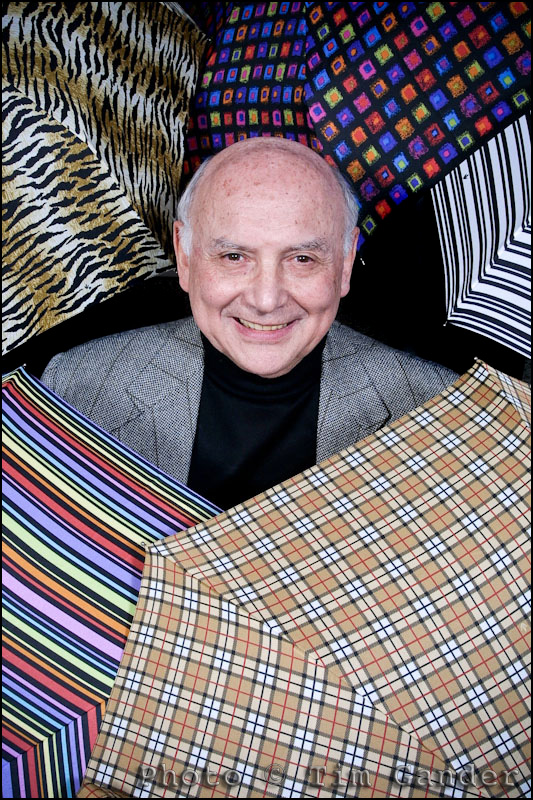 He's not Rihanna, but he's got umbrella ella ellas.

He was utterly charming, patient and engaging. He told me it’s ok to open an umbrella indoors provided you don’t lift it over your head, so putting my superstitions to one side I got on with opening a selection of umbrellas in the factory’s demonstration/sales room ready for the shot while Mr Fulton was being interviewed.

When you’re thinking about having pictures taken with a view to press coverage, you might be lucky and find that a newspaper wants to cover your story and they might send their own photographer to take pictures to go with the article. However, if you’re putting an article together and need pictures to send out to press, it’s worth keeping in mind that a straight headshot of the CEO (or whoever is quoted in the article) may not be enough.

Think about using elements of your business in the photo, even if you’re not dealing with physical goods. Sometimes a physical prop can be a metaphor for the service you offer, so don’t think that just because you sell pensions or insurance that there isn’t something to illustrate this.

My point being, think around your business and the story to see what might suit what you’re writing about. I’m happy (as any decent photographer should be) to discuss ideas with you. Don’t just dig out a portrait taken with the company logo in the background and assume it’ll get used. And even if it does get used, most people will ignore it as “just another headshot.” Far better to have a shot which helps illustrate the story. It will reinforce the point of the article, and most importantly of all, more people will read it.

As for Arnold Fulton, he insisted every visitor to his factory takes home an umbrella, so I chose a storm-proof golfing model which is still going strong today, which might explain why I’ve enjoyed the return of the rain even more than most people.