One of the things I love about my work is meeting interesting people and finding myself in interesting places. A fine example of this was an unexpected assignment for Centreline Air Charter, based at Bristol Airport, where I was asked to take a portrait of Centreline’s CEO Phil Brockwell for European Business Air News, who were to run a front page story on the company. Centreline didn’t have a suitable image and called me up to help them.

EBAN might very well not be a publication you’re familiar with unless you happen to own an aircraft operation in Europe, Russia, the Middle East or Africa. You don’t? Fair enough. To be fair, I’d not heard of it until the call came, but I strongly believe that all publications, even trade ones, deserve decent photography.

Phil is one of the friendliest CEOs I’ve ever met and it’s not every day I’m asked “where would you like the jet?” I suggested the South of France, but Phil meant where on the runway apron. Maybe next time, eh?

One of the difficulties I had with this particular portrait was that the sun was especially harsh, in the wrong spot (it almost always is, ask any photographer), and we needed one of Centreline’s shiny white aircraft in the background too.

My choice was either to have Phil squinting into the sun, or silhouetted against the bright backdrop. I had one other trick up my sleeve; bright backdrop but with tricksy fill-in flash on Phil (or Phil-in flash if you will… ouch) so that both background and subject would look good.

Having had the jet moved to where the shot would work best, I set up Phil where he needed to be and set my flash and camera to mitigate the sun, took a few test shots, made adjustments, took some more test shots until I could see we were getting close, made further slight adjustments, then got on with the real deal.

I knew I couldn’t spend a ton of Phil’s time getting things right, but it was nice to be given enough time to set things up properly and also get a variety of shots so that Centreline’s public relations handler would have a choice of images to put over to the magazine.

Apart from having to come off the runway for a coffee break while another jet came into land, the whole shoot was done in under an hour. More than 10 minutes is a real luxury when shooting CEO portraits and I was grateful for the time, but I also think the results were worth it.

The same day I delivered the images to Centreline’s PR, captioned and ready for publication. Their (and my) preferred shot made it to the cover of EBAN as planned and you can see the result below and read more of Centreline’s story here. A good result I’d say and a very satisfying assignment. I certainly didn’t wing it (ouch, again). 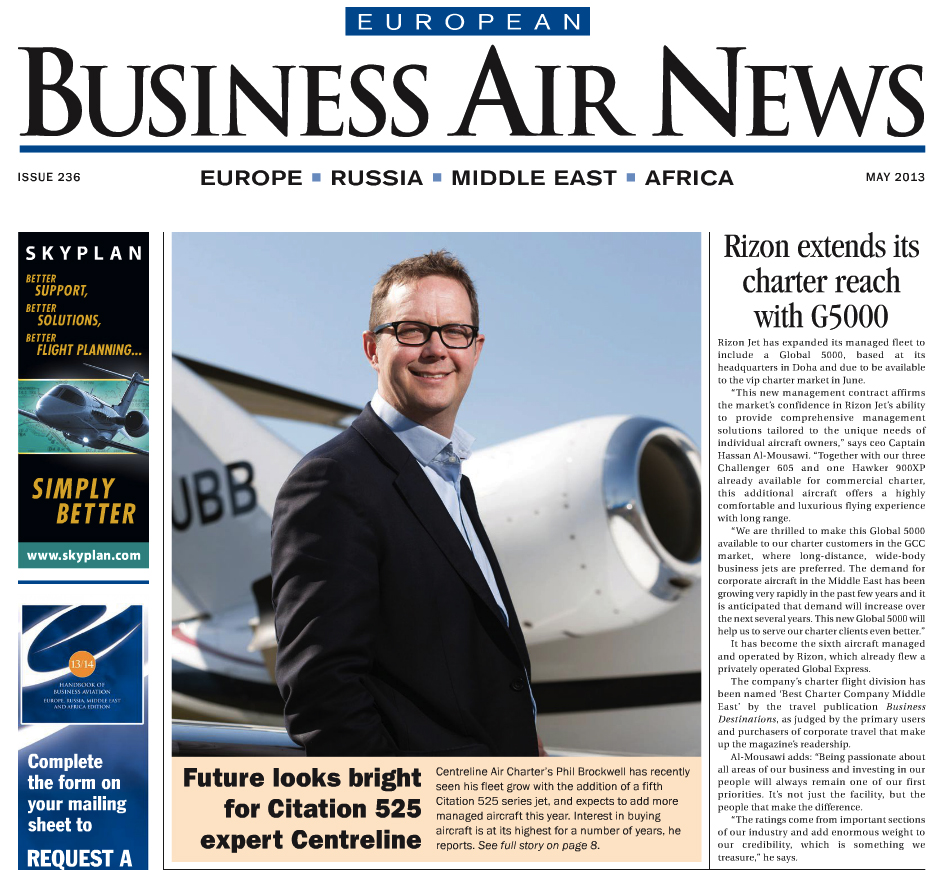