The selfie, a fine tradition

I’m a little nervous about this week’s post in that instead of featuring a photo of some poor, unsuspecting client, it features me. This potentially opens up my comment box to many hilarious responses, but that’s ok, it’s probably justified. 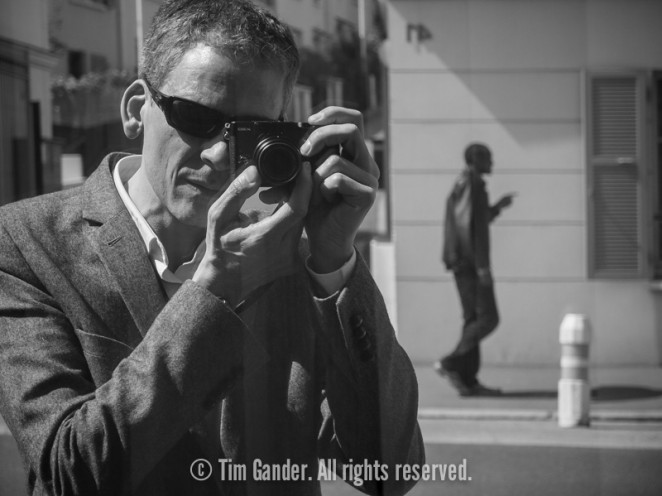 The man behind maketh the photo (click to enlarge)

The reason for inflicting this narcissistic portrait on you isn’t just that selfies have been a feature of the news in recent months (most notably David Cameron, Helle Thorning-Schmidt and Barack Obama at Nelson Mandela’s memorial service), but having taken the shot, it sparked a thought about photographers and selfies as something of a tradition.

First a little background to how this photo came about… I was in a little town near Paris, France at the weekend for a wedding (don’t worry, I was a guest, not the photographer – I haven’t gone completely mad!) and had some time to kill between arriving and the start of the service, so I took my camera and went for a wander around the streets.

Now I can’t speak for other photographers, but give me a super-reflective surface like a shop window and some interesting light and I can’t resist playing around to see what I can do with it, and this particular shop window seemed to call to me to make a selfie.

I’d just lined up for the best shot I thought I could get when I spotted a man in the reflection, walking along having a fairly lively conversation with himself. I waited until he moved through to the right spot and caught him in mid-animation. Without him I think the shot would have been about 50% less interesting, and possibly not even worth keeping. You can tell me if you think it’s worth keeping anyway, it’s probably not for me to say.

I’m not saying this photo is anything special, but where the selfie of iPhone fame tends to be of drunk teenagers gurning at themselves, there are plenty of examples of photographers who have used themselves as models when experimenting with light, composition and reflections. Take a look at the Vivian Maier official website and you’ll see she really played with the genre.

I suppose what I’m trying to say in probably too many words is that there is no shame in taking selfies. They can be flippant and fun, they can be more considered and exploratory. I could be honest and admit that mine is even more self-absorbed than a quick iPhone snap (which I’ve also done on occasion), but when there is no one else around to model, well you just have to go with what you’ve got.

I find them a useful way of trying out something new, I just wish I had a better model to work with.