This week I thought I’d talk about what I’ve got coming up because it’s rather big. Next week, the first week in July, I’m taking on quite a challenge. For the first time ever I’ll be photographing the Summer Graduation ceremonies for University of Bath.

This event would normally be covered by the university’s in-house photographer Nic, but he recently broke his collar bone in a cycling accident so I’ve been asked to step in to cover the work he’d normally be doing this time of year. It’s been a busy few weeks taking pictures for the university, but next week will be Intense with a capital I.

Up to four graduation ceremonies a day for three days, including formal portraits of honorary graduates, the procession from Guildhall to Bath Abbey, the presentations inside the abbey and the students and their families celebrating outside after their ceremony. Then I go and do it all again, plus editing and delivering rush shots at the end of each day and editing all the images at the end of the week. I’ll be ready for a lie-down by the end, that’s for sure.

And even before the event I’ve had planning and briefing meetings and today I took a recce to the abbey to see the layout for the ceremonies and also to check out a high vantage point for an alternative shot of the students piling out of the abbey after the procession, which is how this week’s blog photo came about.

After seeing inside the abbey, I was shown up a very dark, winding, narrow spiral staircase (approximate age, 500 years) and onto a balcony above the main entrance to see if the vantage point would work. The lighting and weather on the day will determine if this is going to work out, but in the meantime, here’s a shot I took this morning looking up Abbey Churchyard with the entrance to The Pump Rooms to the left. 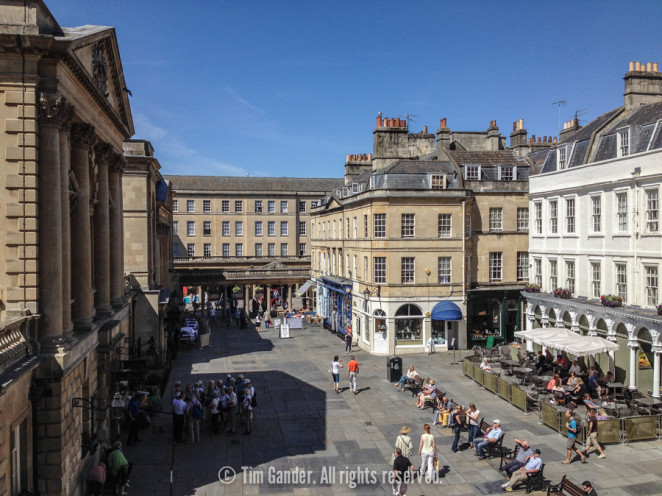 A super view across Abbey Churchyard, which will be packed with students and their families next week