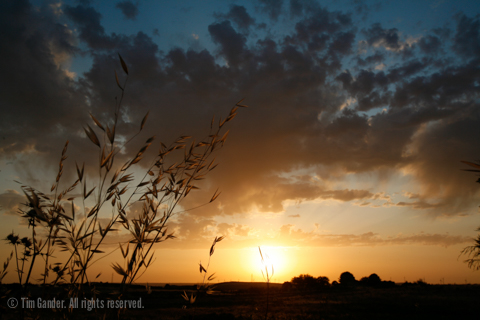 I believe I joined online photo library Alamy in 2004. Back then they were offering half decent rates and a healthy sales percentage to photographers.

Over the years the rates have fallen and the percentage paid to contributors has tipped inexorably in favour of Alamy.

However, it’s time to withdraw from what has become a rather photographer-un-friendly agency. The latest revision to their terms and conditions means even less power to the photographer wishing to keep control of their copyright, and even less likelihood of being paid for re-uses of images when a client decides to extend their original usage. It’s an issue too involved for this blog, and anyway you can read all about it over on EPUK.

Alamy’s reputation amongst photographers has been further strained when this week they sent out an email (which I also received) to thousands of contributors telling them the interest in their work had spiked. That is to say, more people were clicking on more of any given photographer’s images to view them. Not buy them, mind you, just looking. That’s lovely then, my bank manager will be pleased.

The problem with this email is it quickly became apparent that they had sent this to a very large number of contributors, telling them they were in the top 10% of contributors being sought out by potential clients.

Mathematically, not everyone can be in the top 10% (to be precise only 1 in 10 can), but while Alamy claim to have informed 4,000 of their almost 40,000* contributors of their good fortune, it seems odd that so many, like myself, only have a few hundred images on the site and personally I’ve not seen any spike in my statistics. I’ve certainly not seen any extra sales either and I hear I’m not unique in this.

It’s impossible to verify that Alamy really has only informed the top 10% contributors, we’ll have to take their word for it, but some have questioned the timing of this email while there are so many complaints about the new T&Cs and quite a few photographers already pulling their collections from the site in protest.

I’m sure Alamy would say that the email and the change in T&Cs are pure coincidence, but if that’s the case, who sanctioned the release of the email now? Did they not know about the T&Cs furore? Are departments within Alamy so unaware of each others’ work and the PR crash this would cause? 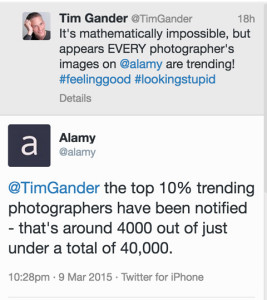 Alamy denies all their contributors got the same email

Another problem with the figures is no one outside of Alamy can question them. Even contributors posting on the members’ forum about the new T&Cs and/or the “10%” email are finding their threads removed by forum moderators, presumably to stop a full-blown revolution and a loss of more contributors.

Now it’s worth mentioning I have 652 images on sale through Alamy. That’s a teeny tiny number compared to more than 55 million they host (again, how did I make the top 10%?!) My point being, if I leave Alamy they will notice my departure in much the same way a cow poo notices the exit of a single fly. Equally, my sales are so infrequent and the rates paid so utterly miserable, that like the aforementioned fly, I will barely notice that I’m no longer standing in poo. But being part of the fly swarm means all the work I do is devalued, and I think it’s time I valued my work more.

When I leave Alamy, which I’m 90% certain I will do (note to Alamy: that’s 90% of 100%, in case percentages are tricky for you) it’s possible I will not offer those 652 images anywhere else. If I do it’ll be through my own website and at prices I set. I might never sell a single frame, but at least I won’t have to get angry at the risible fees and overgenerous licences Alamy sell my work for.

So good bye Alamy. I’m sorry it’s come to this, but clearly you don’t need photographers who care about the value of their work.

PS. If Alamy are having a hard time, you should see the mess Getty Images is in. They’re so much in debt, they can’t even pay their interest charges.

Update: As of this evening I have given Alamy my formal notice to quit as a contributor.