Royal visits are a unique kind of photographic assignment, as I was reminded when Prince Harry visited University of Bath on Friday for the trials of the Invictus Games which take place in Orlando, Florida, in May.

I stepped into the assignment at fairly short notice due to the university’s staff photographer being laid low by a stomach bug – you really can’t cover an event like this if you’re feeling queazy!

Prince Harry was visiting to see UK athletes taking part in the trials and of course help to raise awareness of the games which were founded to give injured, wounded and sick military personnel a chance to test their sporting skills to the highest standards.

My role in covering the visit was to get pictures the university could use the same day on their website and for press release to showcase the fact they were hosting the trials at their excellent Sports Training Village. 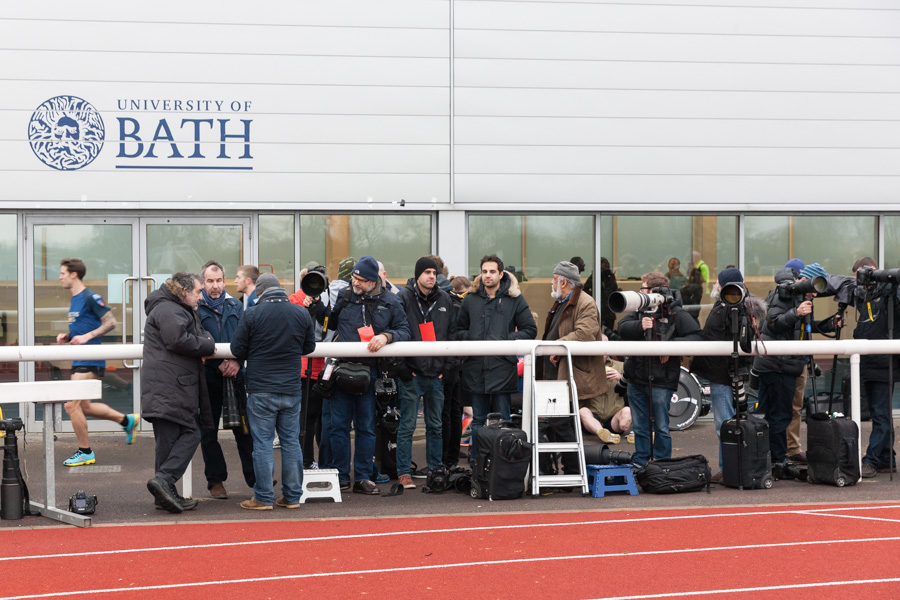 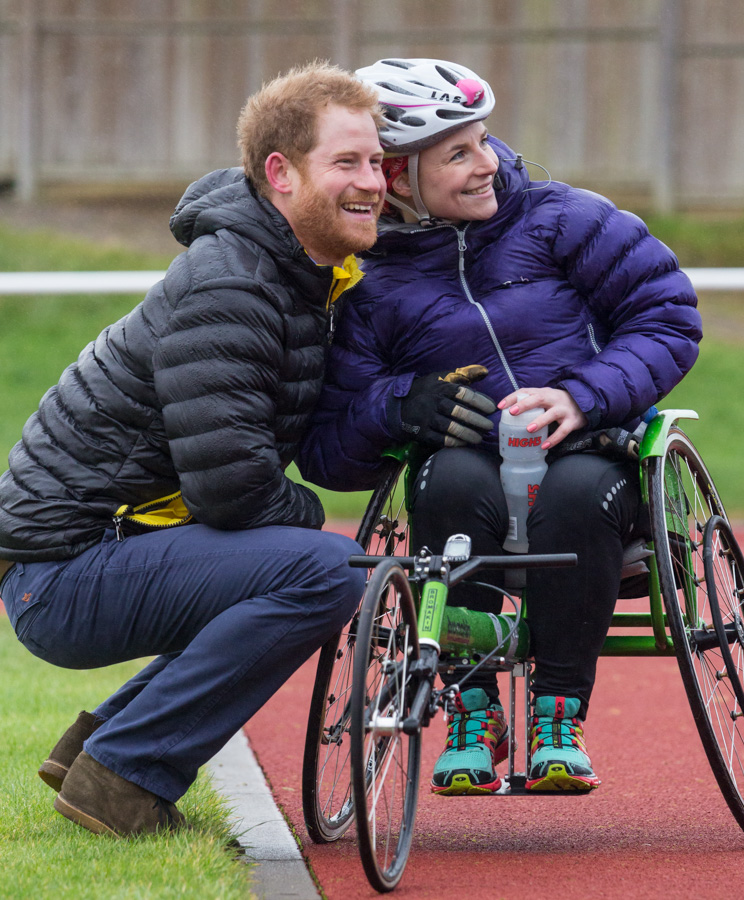 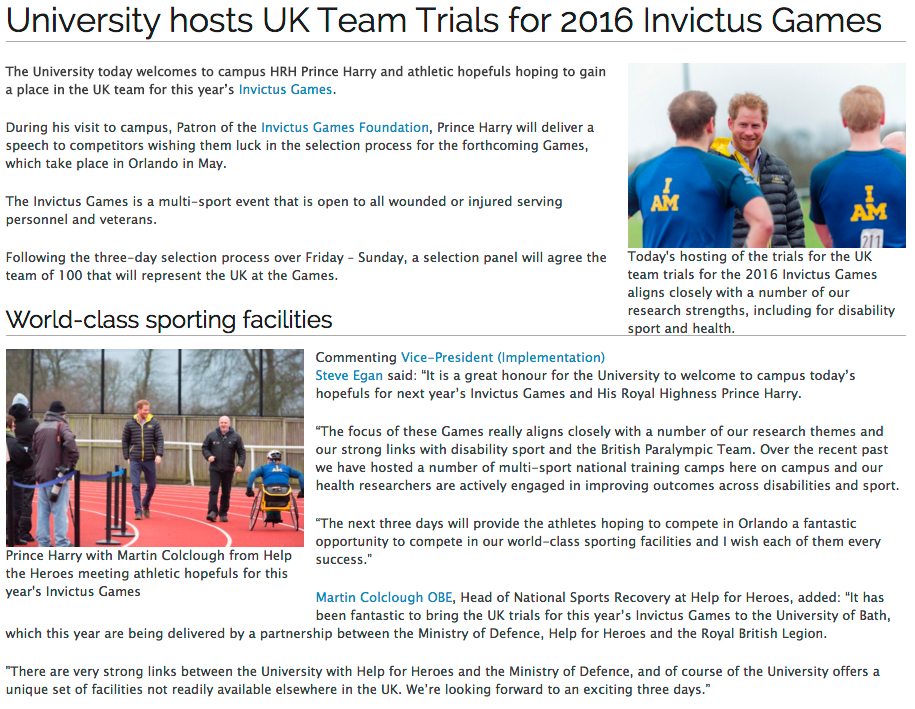 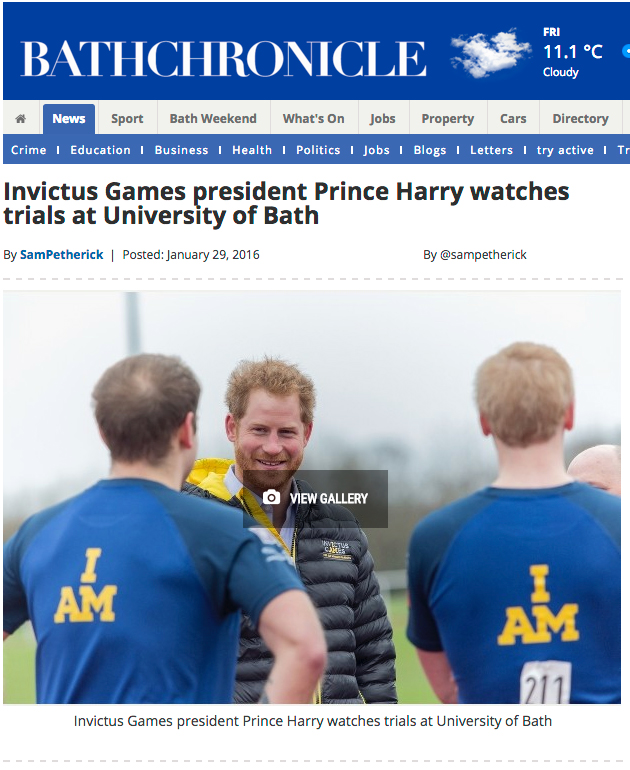 Local press also use the photos

My pass was for the outdoor fixed positions, which meant I could move about within certain areas. Other photographers had Rota passes, which is the Royal press office system for ensuring an event doesn’t become clogged with photographers. Those carrying a Rota pass will often have greater, or extended access to an event, but they will be required to allow use of their pictures by any legitimate media outlet that requests them.

Even before the arrival of the Prince I made sure I was getting on with fulfilling my brief; getting shots of the gathered media to show the wide interest and shots of athletes warming up or taking part in trials.

The weather was blustery, sometimes raining and not fantastically warm, so it was a relief when the Prince arrived on schedule. The Royals tend to be fairly prompt unless they’re coming from another event. If that overruns, you just have to be patient and ready.

To cover the Royal visit as he moved around the Sports Training Village running track, chatting to officials and athletes, I worked two camera bodies; one with a wide zoom on and the other with a telephoto zoom (with a 1.4x extender attached for extra reach). Since most of the action was happening at quite a distance away, the long end of my telephoto lens was a godsend. I could see plenty of the other photographers had their huge 500mm and 600mm lenses and were using them a lot, while I had to make the best of my zoom and just make sure I had clean shots I could crop into. I really didn’t need to see into Prince Harry’s soul for my purposes, so it was all fine.

I took my last frame around midday when the facility for Fixed Position passes ended and the Prince went indoors to continue the tour. That was my cue to get my laptop and edit a selection of images for the university homepage news feed and a news article. The rush pictures were chosen, captioned, edited, delivered and added to the website well within the hour. I could then leave the campus, head to my office and do a more considered edit on my large monitor and the job was done.

Royal visits are often a case of “get what you see.” Not much tends to be set up specifically for stills and this leaves you looking for compositions which are tidy not because you set them up, but because you’ve chosen a good position and the composition happens to come together nicely. Expressions will be fleeting and you have to be ready with your camera to capture them, which is why it often looks like Royal photographers never take their eyes from their cameras – they can’t afford to miss a shot.

On this occasion I was surrounded by photographers who shoot a lot of Royal events. Some travel the world with the royals and have built entire careers doing this. For my part, I’ve covered a few Royal events over the years, but it always makes a refreshing, adrenaline-fuelled change from the norm. I shall look forward to the next one.